Unforgiveable (October 13th and 14th at the Cleveland Cinematheque) 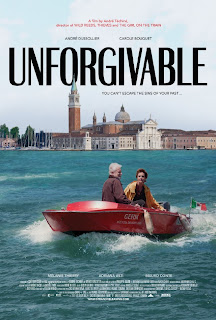 Having just seen a documentary about the legalized system of corporate bribery that is campaign finance, I no longer have any faith in US presidential elections or candidates. North Korea or Cuba could boast a more “honest” system of choosing a leader than America. But just suppose, in science-fiction fashion, that Romney or Obama really were concerned about the issues. Then I would call for one or both of them to take a courageous stand and demand…the immediate criminalization of marriage.

The benefits of banning marriage are manifold. Wedding horrors like that fatal brawl in Philadelphia would be a thing of the past. So would countless instances of spousal abuse and homicide flooding our crowded penitentiary system. O.J. Simpson would certainly second me on this. So, I imagine, conceivably, would Danny DeVito. All those "Bachelor/Bachelorette" stupid reality-TV shows would no longer be viable. And best of all, a Constitutional amendment making marriage illegal across the boards would GET THE DAMN HOMOSEXUALS TO STOP WHINING.

Outlawing marriage would also probably have meant a more tranquil life for the characters in UNFORGIVABLE, a 2011 French drama (whose original title IMPARDONNABLES would more likely translate as “unforgivable offenses,” but I guess that name would better apply to TAKEN 2). Directed by Andre Techine in straight-on neo-realistic fashion, it’s a grownup relationship drama with a life-really-does-suck-like-this vibe.

Francis (Andre Dussolier) is a big-name French author, of highfalutin’ “literary” crime fiction (I might hazard a guess at the Belgian Georges Simenon as a very loose inspiration). But in a creative and financial slump, he decides to relocate to an Italian island property near Venice, for fresh inspiration. He hits things off with his real-estate agent, also French, an icily pretty lady named Judith, who knows his books. Judith is played by a gracefully aging Carole Bouquet, an actress and model whose sleek good looks have been on display in the cinema for three decades now. And is it my imagination or do her characters always throw themselves at rotten men? I hate movies.

Despite his reputation for heartless womanizing and at least one wrecked marriage behind him, Francis claims that Judith fascinates him like nobody else. Soon they’re newlyweds, though Francis is still having trouble getting a new novel off the ground, and Judith has to work long hours to support them. Or…does she? Suspicious over her frequent absences – and hints dropped all over that place that Judith has had lots of affairs before settling down with him (kind of like the Catherine O’Hara character in the comedy BEST IN SHOW), Francis hires an Italian woman private investigator, faltering in both her health and finances, to check out Judith for possible infidelities. Complication: the openly bisexual P.I. once had an affair with Judith herself. When she recuses herself from the case, Francis latches onto her grown son, a recently released ex-convict with a lot of issues, to spy on Judith instead.

There’s also a subplot involving drug-dealing young Venetian aristocrats, and Francis’ grown daughter, who has fled her own stable marriage and good, adoring  husband (I’m guessing he ain’t French!) and daughter to be the obsessed sexual plaything of one of these high-born hoods. SORT OF A SPOILER ALERT IN A CASUAL FRENCH ART-FILM SORT OF WAY: But suggestions that this will go in a thriller direction, perhaps film-noir with Judith as a deadly femme fatale, are just red herrings. If anything, the likable Francis is the rotter doing the passive-aggressive manipulating. Perhaps he’s even putting his latest marriage and the stability of those around him at risk just to provide fodder for his new book manuscript. How well do we really know the people we’re supposed to love?

At least that’s what I got out of it. That and, don’t marry a popular novelist. Or the messed-up daughter of a popular novelist. Or a LGBT female detective. Seems the only healthy pairing in the entire picture is between one character and his dog, and I must warn you, even that doesn’t end well for the dog. Mais non!

UNFORGIVABLE is based on a novel itself, but I can’t claim familiarity with the source material, sorry. Call it a sign of the even-handedness and maturity of the flick that I won’t even pretend to guess whether the author was a chick or a dude (or a married couple, brrr). I was rather amused, though, that, while every character in the piece claims to be penniless and desperate, they all live like jet-setters in posh, upscale Mediterranean settings, villas and mansions. If this is the European Union in an austere recession, what must it be like in boom times? If enough Americans get an eyeful of that, maybe they’ll also stop their Tea Party hate speech and cheer Obama into a second term to bring on the EEC-style socialism. Along with the ban on marriage, of course, so we won’t be distracted from enjoying our beach-houses. (3 out of 4 stars)
Posted by Charles Cassady Jr. at 8:00 AM