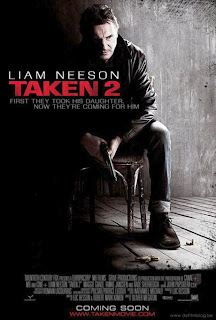 TAKEN the first was a passably enjoyable action flick because it trafficked in a sort of skull-crunching fat-free momentum, wearing all of its sentimentally out on its sleeve and never getting bogged down with things like complex characterization or marginal believability. We connect to Bryan Mills (Liam Neeson) simply because his teenaged daughter, Kim (Maggie Grace), has been kidnapped by sex traffickers. And, as the movie unspools, we watch him posed as a DEATH WISHian Bronsonesque hero with Jack Bauer spy skillz, consumed with vigilante tunnel vision.

It’s fun, in an appropriately American (read: jaded and self-obsessed) kinda way – he couldn’t be bothered to bring down the trafficking ring, cut all the girls loose, blow-up the base and jetpack into the sunset… instead, he shoulder-checks his way through brothel-loads of k-holed innocents without a second thought until he reaches his own progeny and strolls whistling home, leaving the rest of the suffering to languish ‘til such a time as their own fathers deigned to heave themselves off the couch and muster their own berserker rampages.

But I’m here to talk about TAKEN 2 (for the record, I would’ve preferred TAKENS).  Spawned by TAKEN writers Luc Besson and Mark Robert Kamen, and director Olivier Megaton (COLUMBIANA), the film makes misstep after misstep, criminally misjudging the strengths of its predecessor while systematically amplifying all of its flaws.

In imagining an apt TAKEN sequel, my earlier DEATH WISH comparison seems all the more appropriate – why not just allow Neeson to neck-snap and pistol whip his way through an escalatlingly ridiculous series of rollicking corset-tight bullet-riddled inanities? But no, TAKEN 2 saves Neeson’s intense, captivating savagery for the tepid third act, counting on the antics of Albanian mob boss Murad Hoxha (Rade Šerbedžija) and daughter Kim to keep the audience rapt.

So, remember the anonymous now-iced Albanian takers from the first movie? Well, one of their father’s is a big-time crime monger who has sworn revenge on Bryan Mills and his family. Mills, meanwhile, is still trying to insinuate himself back into said family unit’s good graces.  After his ex-wife Lenore’s (Famke Janssen) new hubby turns bastard, he invites both Lenore and Kim to join him in Istanbul, where he has just completed a high-end security job. Cue Murad and the Albanian mob, who find them and successfully kidnap the ‘rents, leaving it up to veteran victim Kim to free her pappy so he can commence with the rump-punting.

It fails for a number of reasons:

1.       These Albanian tween-purloiners weren’t built to be compelling villains. They’re badass-posturing ciphers – the sort of faceless vessels for xenophobic paranoia that we oh so love seeing reduced to guts, clots and bone meal.  What makes the first film fun is watching their jaws drop as their ho-hum sex kidnapping routine is shattered by a veritable Tasmanian devil of heat-packing middle-aged fatherhood. Now that we’ve established Mills’ acumen for exaggerated violence, he warrants a nemesis with a little pizzazz or, at the very least, a cheap idiosyncrasy or two (maybe a metal thumbnail or like he’s always eating pretzel sticks or something). I understand (oh how we all understand so stop hammering it in already) that this blandly overweight mob heavy is a father himself, also seeking revenge on behalf of a wronged child, but he lacks the force of personality - or even screentime - required to serve as a worthy foil.

2.        The film flips the pursuit / chase dynamic. TAKEN is fun because not only does Mills dispense beatdown upon beatdown, he’s also the pursuer, hunting down each ludicrous toe-to toe with the speed and focus of a heat-seeking missile. Here, Mills and his family are the pursued. Until way past the one-hour mark, there’s no great battle-cry for the audience to issue, no war horns to blow, just a series of hum-drum chases and escapes that provide little to root for. It doesn’t help that Megaton attempts to mimic the fight-style of Paul Greengrass’ two BOURNE films, burying Mills’ few violent triumphs in a flutter of inept close cuts and the played out shimmy-shakes endemic to lazy modern fight sequences.

3.        The setting …and I don’t mean Istanbul. Certainly a city so rich in history and varied in culture has plenty to offer in the way of opulence, squalor and all points in between. But aside for some token flyover shots and skyline views, the film limits itself to paint-peeling hallways and municipal ruin – the sort of dressing-stripped tenements through which countless tactical teams have chased myriad terrorists in any number of post 9/11 pseudo-verite action flicks. Even its climax, for which the first film saved a secret elevator and hedonistic human auction, is framed within a vacant marble bathhouse, almost daring comparisons to the vastly superior EASTERN PROMISES.

Credit where credit’s due – there’s an amusing bit featuring blasé grenade-tossing, and a car chase that’s  precisely mediocre, but none of it’s enough to substantially sweeten the pot.

If I went into the first film with zero expectations and left pleasantly surprised, TAKEN 2 was actively disappointing. I’m curious as to how the filmmakers so thoroughly misconstrued the strengths of the original. TAKEN is an almost perfect distillation (or maybe For-Dummying ) of the best bits of Besson’s directorial work – artfully Frenchified American action paired with  head-smackingly Americanized French melodrama. But I’d feel bad ascribing any cultural particularities to the drab fumblings of its sequel. French artifice, American nitro, Albanian sex murder… what does it matter? It’s as bland and forgettable as the worst of all three. Well… the worst of the first two. A forgettable one of the third would probably be the best one of those. (1 out of 4 Stars)
Posted by Matt Finley at 12:01 AM