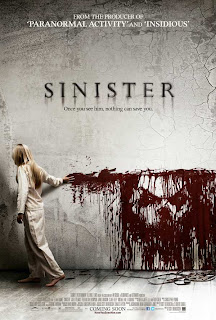 It sounds terrible on paper – a cuddlier Jack Torrance stars in a remake of 8MM as re-imagined by PARANORMAL ACTIVITY fans. Wow. It sounds even worse if you read it out loud. Fortunately, as executed by writer C. Robert Cargill and director Scott Derrickson (THE EXCORCISM OF EMILY ROSE), SINISTER is a decent, ticket-price-worthy specimen of mainstream horror, its potentially noxious cocktail of been-theres and done-thats poured expertly into the filmic equivalent of one of those garish girly drinks that you order as a half-ironic joke, but then secretly enjoy.

(To further torture that metaphor, the miniature folding umbrella is Ethan Hawke, who plays every jangled nerve to its fullest.)


Here’s the story: Ellison (Hawke) is a has-been true crime writer with affection for the bottle and a slowly fracturing family life. He’s just dragged his reluctant kin to a new house, where he’s certain he’ll pen his next bestseller - an exposé on the unsolved kidnapping and brutal murders that occurred on that very same chunk of real estate. As his weary wife, Tracy (Juliet Rylance), nightmare-plagued son, Trevor (Michael Hall D’Adarrio) and artsy young daughter, Ashley (Clare Foley), attempt to adjust, Ellison discovers a mysterious box of terrifying Super 8 home movies. Turns out said kidnapping and brutal murders are just the blood-soaked tip of a hellish, supernatural iceberg.

If Derrickson’s EMILY ROSE was good for anything, it was the unlikely genre mashing of body-contorting paranormal horror with gavel-pounding courtroom drama. Likewise, SINISTER’s most attractive attribute is the incorporation of a procedural paper chase (/ Interweb slalom) into an otherwise middleweight Boo-and-EEK! haunted house joint. From behind an initially unshakable goateed intensity, Ellison glares at yarn-webbed maps, crime scene photos, newscast recordings and, of course, the hissing Super 8 atrocities, coaxing out clue after clue. For the tedious case-file digging, he enlists the help of an overeager police deputy (James Ransone [AKA Ziggy from The Wire(!)]), whose scenes help to not only break-up Hawke’s booze-tickled game of solo detective, but also provide goofy comedic relief – a must for a movie that would otherwise feel one click too serious, hamstrung on its own gaudy, over-muscled darkness.

There’s definitely a legitimate creep-factor in SINISTER’s buildup, which is successful in allowing the imagination to wander, untethered, through a dark world of ritual murders, half-glanced monsters and the requisite unexplained floor creaks, but as the disparate clues begin to accrete, the goosepimpled tension recedes considerably. Cargill has cited a nightmare he had after watching THE RING as his initial script inspiration. But whereas THE RING offered an elegantly simple supernatural threat with the potential to toe-tag anyone with a VCR and some spare curiosity, SINISTER’s antgonist, for as convincingly as its portrayed, doesn’t have the same raw, proliferate nightmarish weight. Also, the creature reminded me way too much of Der Kinderstadt from that terrible second season Buffy episode.

Don’t mistake me – when the sun sets and the music swells, there’s some legit freakiness afoot, but all the warning signs create the horror equivalent of a laugh track – just as a network sitcom's  guffawing directive to chuckle reduces the raw impact of a joke, so, too, do the dark-and-humming preludes to chaos bleach out all but the most expected anxiety, the most familiar tension. I know – the phenomenon is epidemic in bad horror… it’s just a bummer to see it so front-and-center in an otherwise decent flick.

I know. Studios are like Taco Bell when it comes to horror. They take the popular ingredients  - some creepy kids, a splash of found footage, and 64oz Coke-rattling attic bangs – and repackage them into an endless string of variably titled cinematic Chalupas. And, sure, SINISTER contains all those elements... But, for the most part, it genuinely feels like there’s a live person behind it.

You know what? Forget the whole girly drink thing. SINISTER is like a homemade taco, just, you know, one made by a guy who used to work at Taco Bell. (2 1/2 out of 4 Stars)
Posted by Matt Finley at 12:01 AM