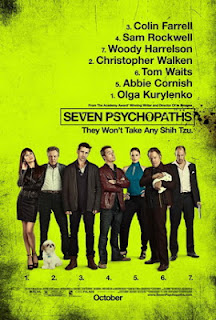 It’s not always easy distinguishing eccentrics from alcoholics, or spotting the difference between sycophants and psychopaths.  Sometimes the lines are blurry.  Frequently, the symptoms overlap.

Irish playwright Martin McDonagh toyed with these archetypes a couple years back with the marvelous IN BRUGES, wherein all hell breaks loose after Colin Farrell’s penitent assassin goes into hiding.

Farrell is back for McDonagh’s follow-up, SEVEN PSYCHOPATHS—but now he’s first among equals, playing alongside Christopher Walken, Woody Harrelson, and Sam Rockwell in a shoot ‘em up study of love, loyalty, violence, and sanity.

Farrell is Marty, a hard-drinking screenwriter whose girlfriend (Abbie Cornish) wishes he’d crawl out of the bottle and get back to work.  His best bud, Billy Bickle (Rockwell), offers to help complete a script Marty hasn’t even started, save for a title: Seven Psychopaths.  Billy’s a dog thief who kidnaps canines to reap the rewards offered by their grieving owners.  He’s also full of gruesome tales about vengeful Vietnamese villagers and the anguished, straight-razor-wielding fathers of murdered Quaker girls.

Weirdos like rabbit-toting Zachariah (Tom Waits) come crawling out of the woodwork when Billy posts a newspaper ad inviting other misfits to share their stories with Marty.  But fellow dog-napper Hans (Walken) is targeted along with Marty after Billy swipes a Shih Tzu belonging to hot-headed gangster Charlie (Harrelson).  Hans’ hospitalized wife (Linda Bright Clay) and Charlie’s main squeeze Angela (Olga Kurylenko) are likewise caught in the crossfire as Charlie and his goons hunt for his precious pooch.  Meanwhile, there’s a serial killer on the loose whose calling card is the Jack of Diamonds—and whose mission is to be the guy who kills the guys who kill other guys.

Then things really get confusing.

McDonagh’s second feature is a blood-soaked black comedy that tangles fact with fiction and stretches the concept of art-imitating-life-imitating-art, often to hilarious ends.  Marty, Billy, and Hans flee to Joshua Tree National Park, where booze and peyote-fueled visions inspire hilarious, Hunter S. Thompson / Quentin Tarantino endings to their predicament—and Marty’s screenplay.  The nuttiest of the bunch, Billy, has a hard time keeping his few remaining wits about him when real life doesn’t pan out according to the fantasy he’s imagined.

“You didn’t bring a gun to the final shootout?” he asks Charlie.

“You told me not to,” responds the mobster, who has no qualms about sticking a gun in anyone’s face anywhere else in the movie.

Later, Walken refuses to raise his hands when the bad guys have him in their sights.

Which is precisely McDonagh’s point:  These people wouldn’t be considered psychotic were they reliable, punctual, consistent members of society, influenced by logic and compelled by norms and mores.

SEVEN PSYCHOPATHS has McDonagh’s deliriously demented cast frustrating the hell out of each other at every turn with their inability (or unwillingness) to adhere to expectations.  As the sanest (if not soberest) of an insane lot, Farrell voices Marty’s consternation in his own thick brogue, dark eyebrows furrowing overtime.  Rockwell’s manic thief is funny, but it’s the cravat-sporting Walken who devours nearly every scene with sly looks and left-field remarks.

If Tarantino’s uber-violence makes you squeamish, you’ll want to skip SEVEN, which quadruples the exploding-head quotient of PULP FICTION while maintaining a gritty existentialism.  There’s shooting, stabbing, throat-slitting, and lots of trash talk—particularly from temperamental Charlie and spiritually aloof Hans.  People easily offended by the “C” or “N” words should be forewarned.  Homosexuals and obese people are insulted repeatedly, and organized religion is taken to task.

It’s not a brisk movie, either.  For every uproarious minute of dream-sequence slaying or cemetery gunplay (with ninjas and flamethrowers) there’s ten minutes of people just sitting around talking.  Still, like the Coen Brothers (BURN AFTER READING, FARGO) or David Lynch (MULHOLLAND DRIVE, WILD AT HEART), McDonagh shows what tangled webs we weave by connecting the seemingly disparate fates of a handful of goofballs who’d have had nothing to do with one another but for a Macguffin or two (here, Charlie’s dog and Marty’s script-in-progress).

Look for memorable cameos by Harry Dean Stanton (ALIEN, AVENGERS) and Gabourney Sibide (PRECIOUS), and listen for fitting use of Linda Ronstadt and Stone Poneys’ “Different Drum.” 2 ½ out of 4 stars.