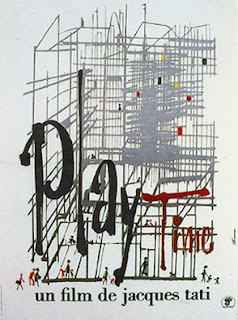 Okay, what was the most ruinously over budget movie comedy of all time? EVAN ALMIGHTY, or Warren Beatty's ill-fated TOWN AND COUNTRY, or even Stanley Kramer's IT'S A MAD, MAD, MAD, MAD WORLD? A good claim to that dubious throne would be the 1967 PLAYTIME, by French slapstick master actor-filmmaker Jacques Tati, a followup to his two hits MR. HULOT'S HOLIDAY and MON ONCLE. Both hard acts to follow, and Tati invested ten years' of effort and I don't want to guess how many francs in the third adventure of his signature character Monsieur Hulot, a slow-trudging bachelor in a long tan coat, accident prone, slightly timid and bewildered by the world around him.
To accommodate his vision for PLAYTIME, which was shot in 70mm (that's celluloid film kids. Look it up on Wiki-whatever), Tati built enormous indoor and outdoor sets that literally masked off all the great old landmarks of Paris. One of the jokes in the film, in fact, is that the Eiffel Tower and recognizable Parisian treasures are only seen furtively, like phantoms, as reflections in the monolithic glass-and-steel skyscrapers of the flavorless skyline. Tati ended up bankrupting himself in the process and had to sell off rights to his previous features just to keep the production rolling. Tati frantically cut and re-cut the two-hour-plus material to get it down to more crowd-pleasing size and shape. This was ultimately the WATERWORLD of screen comedy, except WATERWORLD ended up turning a profit.

The near plotless spectacle has Hulot on a visit to the metropolis. He meets a cute mademoiselle, but nothing comes of it for the old fellow (oh, so Hulot's job must be movie critic. Sorry, I'm bitter). The antics are mostly free of dialogue, and what little there is was contributed (in English) by humorist and Francophile Art Buchwald. Extending themes that had already been hinted at and, I must admit, handled more adroitly in MON ONCLE, Hulot feels completely overwhelmed by a progress-crazy sterile society of tube steel, aluminum, plastic, blank walls and uncomfortable-impractical Bauhaus-minimalist furniture. In a busy restaurant Hulot accidentally pulls the handle off an otherwise featureless glass-sheet door, and he has to stand in the open doorway holding onto the disembodied handle, pretending to open and close the invisible entrance for customers. An apartment-hive complex facade is all giant windows that show all the little households and their activities within, like an array of fish-tank aquariums or TV screens. Tati probably studied Hitchcock's READ WINDOW for that one, I'd guess.

You want to like PLAYTIME a lot when parts of it work so beautifully. But even for those viewers whose attention spans haven't been MTV-fried, it's still on the ponderous and indulgent side of the ledger, no question. Oh well, so were Kubrick, Coppola, Chaplin, Lynch, Tarkovsky, Tarantino etc. when they started to believe their own publicity. The finale has a tight street roundabout of people in their cars beginning to transform into a literal merry-go-round ride for a closer that's more whimsical than bitter about the human condition, and moments like that are what makes Tati so great. 2 ½ out of 4 stars.
Posted by Bob Ignizio at 12:00 AM