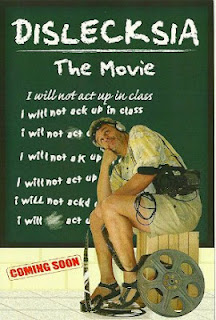 I’ve got a pretty sweet deal at the Cleveland Movie Blog insofar as editor/founder Bob Ignizio doesn’t edit my writing much. At the most he maybe just tones down my penchant for racism, homophobia and gratuitous nudity. I haven’t been so fortunate with a lot of my other editors who, ineptly playing Edward Scissorhands of the newsroom, macheted my prose apart – sometime to the better, sometime making it into verbal confetti and word salads (one of them almost invariably turned “Gallic” into “Gaelic”; must’ve been some Ohio Freedom Fries thing). When you read me at the Movie Blog I’m all here, the good, the bad and the ugly.

Perhaps my former editors were all dyslexic, hobbled by an inability to read. Or they operate under a mandate to publish material suitable for a dyslexic readership. That would sure explain the state of the American media. In any case, given these no-responsibility days, when kids and adults are practically standing in line to be diagnosed with autism and Aspberger's – and I'm given to understand that labeling yourself "special needs" guarantees quite a few nice perks and privileges - I could well believe that newspapers, magazines and website would hire a dyslexic over someone who can read without difficulty. “Diversity” and all that.

So I was surprised how much I enjoyed DISLECKSIA: THE MOVIE, filmmaker Harvey Hubbell's rollicking, star-studded first-person essay on his own dyslexia. It might be enough to make more people want to join the learning-disability brotherhood, especially when he puts on the "differently abled" tag instead.

In the example of dyslexia there might be reason to warrant the distinction. Is this disease truly a "malady"? Unlike other brain problems, nobody ever suspected dyslexia existed until moveable type and public education began to bring literacy to the masses. Suddenly there were whole groups who seemed to have enormous difficulty comprehending text - interpreting and processing written symbols and figures. In other words a technological advance flushed this “disease” from utter obscurity into the open, whereas it might otherwise have gone unnoticed and no problem.

While long stigmatized as stupid or lazy or classroom troublemakers, the dyslexics actually can exhibit a high degree of intellect - it’s pretty well established that Einstein and Edison were dyslexic – and Hubbell, stating that 15 to 35 million Americans are dyslexic, gets an all-star assembly of them. Actor-director-writer-musician Billy Bob Thornton compares dyslexia to seeing ghosts, a sensation not describable. Joe Pantoliano says his youthful pretense that he could read led to his talent for make-believe that inspired his durable acting career. The late TV great (and novelist) Stephen J. Cannell emphasizes that just because he has trouble inputting stuff, he can still output prolifically.

Hubbell’s very well-traveled lens accompanies an all-dyslexic team of biology students in the Costa Rican rain forests, points out that the game of Twister was invented by a dyslexic, and goes to darkest Wisconsin, where the state’s educational politics take a position that dyslexia doesn’t exist – in order that no budgets must be set aside for special education (oh, maybe that’s also why Kansas, Ohio and Tennessee school boards want to deny evolution).

All well and good and empowering, but what really elevates DISLECKSIA is Hubbell’s peppy pacing and abundant sense of humor about himself and his predicament (of course, a Billy Bob Thornton POV helps anything). The feature is a textbook example of creative and hilarious use of massive amounts of nostalgia-laden stock footage. It’s a real ROTF moment when J.Edgar Hoover, Leon Trotsky and Benito Mussolini pop up with gag voice-overs as Hubbell’s own high-school guidance counselors, dumping on their former charge. The filmmaker also unearths vaultloads of weird instructional films and quack-medicine devices foisted upon learning-disabled kids of yesteryear by the psychiatric establishment. Dig the huge Clown Alley corrective eyeglasses only Lady Gaga could (or should) ever wear.

Much as it illuminates its topic and entertains while doing so, the movie does feel a little too long, by about 10 to 15 minutes – or do I have attention-deficit disorder and need a funny documentary to examine my plight? Hubbell, get over here, stat! 3 1/2 out of 4 stars.
Posted by Bob Ignizio at 12:59 PM