Princess Mononoke (October 27th and 28th at the Cleveland Cinematheque) 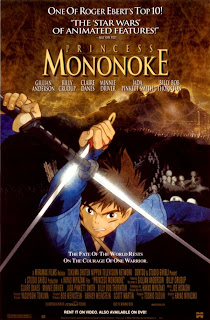 Here's my latest career (sic) update news: I may be serving as a Japanese animation specialist for one of our allied websites. Strange to me that they didn't already have one. Isn't Japanese "anime" supposed to be the coolest thing on Earth? So I asked, didn't any of their other writers, the ones with seniority, want to do anime? Answer: Nope. Nobody at all. Yours if you want it, newbie. Hmmm... That's not the cultural climate I remember.

(here's a metaphorical comparison:
ME - "Hey, Cleveland Movie Blog Reader, I've got a Baywatch starlet here who wants to be your lover!"
YOU (a la Homer Simpson) - "Woo-hoo!"
ME - "Uh, I should tell you, she's not what she used to be, really. been through the wringer. Isn't photographed much anymore. Got rejections by Larry King, Kelsey Grammer, Gilbert Gottfried and Charlie Manson first before working her way down here.
YOU (weakly): "...woo-hoo..."
ME - "It might help if you close your eyes when you're with her. And use the Vicks Vapo-Rub under your nose, the way coroners do..."
YOU - "D'oh!")


We'll see how it goes. And to think, I still resent the whole damn country of Japan for Pearl Harbor and the Rape of Nanking.

But it was a different story in 1999, when PRINCESS MONONOKE made its big US tour. After loads of J-cartoon epics like AKIRA or LAPUTA: CASTLE IN THE SKY or GRAVE OF THE FIREFLIES or NAUSICAA IN THE VALLEY OF THE WIND earned awed critical reaction and making fervent cult fans via laserdisc-copied imports, fans of the Japanese-animation genre had hailed PRINCESS MONONOKE as the Great Yellow Hope. A big-budget theatrical-feature anime with STAR WARS-level crossover appeal for American audiences. A Tokyo import that would finally shake up the white-devil barbarian audiences of the West and make them realize that Japanimation isn't just lazily-drawn Speed Racer adventures or Pokemon or Sailor Moon.

So when revered animator Hayao Miyazaki's Studio Ghibli release PRINCESS MONONOKE broke all Nippon box-office records in 1997, hopeful studio shoguns in Hollywood bought the picture for Miramax. They carefully dubbed it into English with name-recognition actors (Kirsten Dunst, Gillian Anderson, Minnie Driver), and brought it to US screens in 1999 in fairly wide release.

That you don't have PRINCESS MONONOKE action-figures, T-shirts or videogames in profusion isn't only because Miyazaki felt so strongly about his characters that he refused to mass-license them for cheapo kitsch tie-ins (and more power to him on that count). PRINCESS MONONOKE didn't set the box-office blazing in a Godzilla-like inferno here, and it only remains a respected entry in the esteemed Hayo Miyazaki gallery .

It's not a bad movie by any means, but for me felt rather ponderous and self-important (I guess THE GODFATHER's one or two detractors make the same argument). The title character doesn't even appear for the first 40 minutes or so. She's San, a warrior girl raised by wolves in the forests of feudal Japan. And not just any wolves, but the formidable god-wolf who disdains the advance of technological progress spreading across the land. Their main enemy is the haughty Lady Eboshi, an aristocratic inventor who has turned a struggling town into a prototype industrial metropolis, thanks to her perfection of iron-smelting, metallurgy - and rifles. Now the humans can kill the creatures of nature, drill-baby-drill, and despoil the planet as never before.

All this leads to a disruption in the Force, or something. The real hero of the piece is a young archer named Ashitaka who saves his village from a demonic monster spawned as a consequence of Lady Eboshi's entrepreneurship. His reward is to be exiled and doomed (it's a Japanese thing; we wouldn't understand), and he makes a reluctant ally out of the human-hating San - anybody remember San at this point? The movie is named for her, after all.

One shouldn't fault PRINCESS MONONOKE for its narrative sprawl, lofty ambitions and complex themes, far more sophisticated than most cartoon features, Japanese or American (or how Japan, despite the cautionary themes, still blights the environment and overfishes the oceans). But there seem to be three battles going on simultaneously at any given moment, the protagonists rushing to and fro, an overabundance of villains and scene-stealing creatures (one grows to respect Ashitaka's horse, just because it never says a word), and an apocalyptic final that leaves most of the main characters still around, more or less intact, just waiting for the next round. All that's changed, after all the fuss, is that San is now dating.

Visuals are splendid, emphasizing Miyazaki's hand-drawn art, character designs and elegant lyricism with the CGI kept to a minimum. But you know how there are Obama fanatics, and there are Tea Partyist for whom Romney can do nothing wrong? Just so, Grasshopper, are there those who delight in 134 brain-taxing minutes of esoteric Shinto symbolism, sensory-overload visuals and kewpie-doll characters getting the, er, sushi knocked out of them...and those who aren't into it so much. I'm afraid I fell somewhat in the middle on this one. Even if I'm now the latest online expert in the red-hot field of Japanese animation (unless I can pass the gig on to one of you saddoes). (3 out of 4 stars)
Posted by Charles Cassady Jr. at 12:00 AM