A non-review by Charles Cassady, Jr. 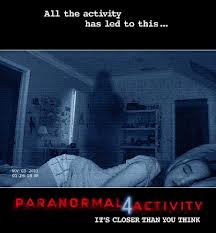 I'll be honest, I didn't actually go to SEE
PARANORMAL ACTIVITY 4. Here's why...

I have some memory of watching PARANORMAL ACTIVITY, the original, on video.

I saw PARANORMAL ACTIVITY 2 in an actual theater. Yet I actually remember less of what happened in the narrative. I think there was
a Ouija board that caught fire, a murder or two at the end, not much more.

I saw PARANORMAL ACTIVITY 3 on video. I don't think I can tell you anything about it at all. I even watched the trailer just tonight to try to evoke some memories. There really weren't any! Just one or two images. And even those might have belonged to some other movie entirely.


So if this trend continues, PARANORMAL ACTIVITY 4 would be instantly forgotten while I'm in the process of watching it! Like one of those bizarre brain disorders Dr. Oliver Sacks writes about. So why would I even go? I'd just be sitting here now in front of the computer screen, wondering
what I was supposed to be writing. I just decided to save my money.

And, if for some reason I were to see PARANORMAL ACTIVITY 5 next October, my
fear is that I will not only have no recall of that one, but I would be finding memories of other movies erased!!! Maybe even good ones I can still sell articles over. Now that's scary! Scarier than
most of the stuff in a given PARANORMAL ACTIVITY.

As I kind of feared four years ago, these found-footage cheapies are just Paramount's successor to the FRIDAY THE 13TH series: junk that can be cranked out every year indefinitely and are guaranteed to turn a profit via the horror-dork Halloween demographic. I wouldn't be surprised if somewhere around PARANORMAL ACTIVITY 13 or thereabouts they just re-release the FIRST one with the number "14" after the title. I promise, nobody will notice, and Paramount can recycle the whole franchise over and over
again infinitely. Pretty much the business model the whole movie industry has been striving towards since the first ripoff waste of time the nickelodeons.

Did you know that at one point in the early 1970s there was talk of closing the whole Paramount studio and
selling the land to an adjacent cemetery? Maybe they did. (N/A out of 4
stars)
Posted by Charles Cassady Jr. at 12:10 PM