[LOVE AND OTHER ANXIETIES screens Thursday October 4th at 11:00 am and Saturday October 6th at 10:00 am at the Chagrin Documentary Film Festival.] 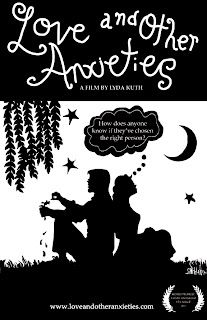 One doesn’t see the name of Ross McElwee as much as one thinks one might; the North Carolina docu-diarist might be considered one of the forerunners of ‘reality TV’ – not that any right-thinking person would want that distinction as far as “Who Wants to Marry a Multi-Millionaire,” or “The Bachelor” or “Temptation Island” are concerned. But with his 1986 film-festival hit SHERMAN’S MARCH, McElwee captivated audiences with a very simple confessional style, showing how what starts out as a homemade documentary on the Civil War jumps to McElwee’s own 16mm record of himself, as a southern intellectual on the dating scene, haphazardly looking for true love.

Ross McElwee gets special thanks in the credits of LOVE AND OTHER ANXIETIES, the debut short-feature from Lyda Kuth, of Massachusetts, who tells us she has long worked on the fundraising and grant-writing side of indie cinema and is now taking the plunge herself as a director. And, like McElwee, she uses the camera (not 16mm though) as a mirror on her own life. And, like McElwee, from time to time, she complains that what she’s coming up with isn’t at all what she’d planned. Sort of like life itself.

Kuth, originally from Cuyahoga County, says she came of age in the sexually liberated atmosphere of the 1960s and 70s, to a mother who went through divorce after divorce. Yet here’s Lyda, long married to just one guy and about to send her daughter off to college. Struck by a sort of mid-life crisis/neurosis, she gets some day-spa pampering, interviews family members, follows a young bride-to-be about preparing for her own wedding, and asks, more or less, how can this all be happening? Where did I go right? (Don’t jinx it lady; Howard Stern filmed PRIVATE PARTS, dramatizing for us all what a great husband he was and stable home life he had; a few years later his wife Allison was out of the picture and Stern was engaged to a lingerie model)

Or at least Kuth attempts to find some answers. But her husband, as he dutifully cooks and does chores, seems a little prickly about all the introspection (and the storied mother doesn’t appear much on camera). Though she has one of her many filmmaker friends assisting to shape this into some sort of structure, Kuth ends up floundering a bit and wondering if her movie-cum-blog will wind up being rather about nothing. Well, that did work for Jerry Seinfeld. And it’s worked (in smaller doses) for Ross McElwee. If LOVE AND OTHER ANXIETIES does have a real flaw, it’s something the novice filmmaker couldn't have easily anticipated, that similar territory was being mined by vet documentarian Doug Block’s THE KIDS GROW UP a few years ago. And - not that one should wish this on Lyda or anyone else - Block was afflicted with hospital dramas for both his wife and aging father, and a college-bound teenaged daughter so sick of being under the microscope of dad’s viewfinder that she threatens to back out and cancel his whole project. Nothing quite that extreme takes place here.

Still, for a certain female viewer demographic – those who regard Doug Block, Ross McElwee, and, sure, why not? Charles Cassady Jr. – as White Male Fascist Oppressors who have too long had control and the spotlight (oh really? Then where’s my high-powered white male fascist job? Seems they’re only hiring girls nowadays), LOVE AND OTHER ANXIETIES will make a decent, non-reality TV kaffeklatsch. I’d take it over “The View.” (2 1/2 out of 4 stars)
Posted by Charles Cassady Jr. at 12:00 AM