Last Ride (October 5th and 7th at the Cleveland Cinematheque) 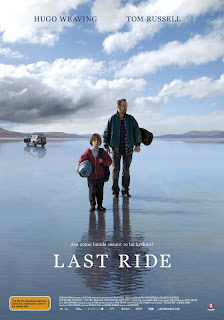 My wife says I look a lot like Australian actor Hugo Weaving. Naturally, she doesn't know the name `Hugo Weaving'; to her he's just Agent Smith from THE MATRIX. Or that what's-his-name elf chieftain from Peter Jackson's LORD OF THE RINGS trilogy. But his name is Hugo Weaving, and he's been a big name in Australian cinema for three decades now. Just don't show my wife his 2009 drama LAST RIDE, with Weaving as a charming ex-con and hands-on single father, charming and yet borderline psychotic. We have enough problems as it is.

We first meet Kev (Weaving) and his 10-year-old son Chook (Tom Russell) on the run after something bad went down. Kev is a career criminal, in and out of prison since forever, and it was in fact a prison math tutor who became Kev's lover and gave birth to Chook; they have a nice reunion sex, but she's attached now and can't take them in (yeah, chicks always dig the bad boys; I learned that early on). Kev takes the news cheerfully and moves on with Chook.

But soon we see a different side of the father, in a robbery and in a vicious, unmotivated bar brawl. Kev has an explosive temper and  parenting skills that are a mixture of gentleness and sadism, passed down from his own father, whom we gather was also a real piece of work (and probably also irresistible to the ladies). Robbing their way across the Outback, Kev tries to instill some survival-skills in Chook, but the boy often falls short and/or incurs his father's borderline homicidal wrath. Bit by bit, Chook looks for a way out. And, ironically, it's the very brute lessons from his father that Chook ends up taking to heart, and the downbeat ending holds out some hope that the boy will turn out better than his dad (sorry, girls).

There's a semi-explanation for the dad's violence, stemming from abuse he received in prison, and as for the reason the pair are on the run...Let's just say Michael Jackson wouldn't have lasted long with this bloke. Weaving is excellent, as a loose-cannon of character whose outbursts are as unpredictable for us as they are for his son. Juvenile lead Tom Russell is also up to the task as the resilient/vulnerable Chook.  Someone get Alan Arkin up here to warn the poor boy out of showbiz before he's destroyed, stat! Oh, yes, this film is three years old, right. Kid is already probably divorced three times.

Glendyn Ivin's drama is based on a novel with which I've no familiarity, by a certain Denise Young, but reminded me a bit about an Australian release that played here early this year, THE HUNTER, a bit more in the noir-thriller genre but still rendered with the same intelligent gravitas. And the filmmakers have an eye for the epic Australian terrain as well.