Kumare (October 19th and 21st at the Cleveland Museum of Art) 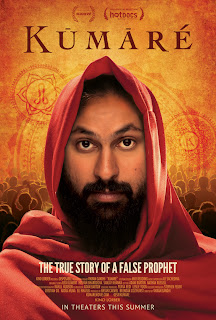 Don't know that Clevelanders saw it in the news last year - probably not, since THE AVENGERS was filming here, and nothing else mattered - but a fellow widely regarded in certain circles as God on Earth, or perhaps the antichrist, died in his 80s at his home base in India. He was Sathya Sai Baba, an Indian "holy man" whose many followers, including westerners, extolled him as the real deal of an Ascended Supreme High Master Big Kahuna, or something, and flocked to his ashram. No kidding, one believer even went so far as to claim that Sai Baba had personally raised him from the dead! You can find Sai Baba in some of those amazing!but!true paranormal documentaries of the 1970s in the CHARIOTS OF THE GODS vein, working his `miracles' for crowds of disciples. A specialty was making a seemingly endless stream of "holy ash" pour from a vessel, which apparently goes over quite well with Hindus and Shirley MacLaine-types. I dunno, I'd expect more of a demigod, but maybe a Sai Baba sorcery is how India grabbed all those American jobs in tech support and phone sales. Can you prove it didn't happen that way?

I've got big book all about Sai Baba, issued from an evangelical Christian publisher in 1980, warning of his evil plans for us all. It should make fun, if rather pointless, reading right now. Anyway, I was thinking of Sai Baba after watching KUMARE, the amazing!but!true!in!a!whole!different!way! documentary from Vikram Gandhi. Those of you in a 21st century mindset might be more reminded of Sasha Baron Cohen's mock-documentary characters or Mike Meyer's THE LOVE GURU by the hoax (or...is it?) perpetrated by selfsame Vikram Gandhi.

Gandhi describes himself as an assimilated Indian-American from New Jersey, brought up by his immigrant family steeped in Hindu tales of Rama, Hanuman, Ganesh and all that mythology, but leaving the religion and its polytheistic gods behind as he grew up. Gandhi is thus bewitched, bothered and bewildered by the fact that, as he shed his religious heritage, Americans around him were embracing, child-like, the even more dubious cosmologies promoted by self-styled quasi-Indian yogis, swamis, cult leaders, and `masters,' who generally held their recruiting drives at the more mystically inclined yoga-exercise studios.

A montage of such weird guru-types comes early on, one gray-bearded old goat declaring pretty frankly that if he can get sex from comely young female disciples, well that's a pretty godlike feat in and of itself, no? Originally Gandhi's game plan was to make a docu-expose interviewing these fake fakirs. But then he decided to take a more direct approach (albeit one right out of the Morgan Spurlock playbook) and become a sham holy man himself to see how easy it goes.

Thus Gandhi lets his hair grow long. He learns some nice yoga poses (his yoga teacher gets prominent credits billing). He smiles a lot and speaks in semi-nonsensical pidgin-English homilies. And thus Vikram Gandhi, nearly all-American, begat "Kumare," the exotic new guru on the southwest mysticism circuit. It's a little disturbing, to the filmmaker as well as the viewer, as Arizona seekers (as the Firesign Theatre said, there's a seeker born every minute) flock to meet Kumare asking advice on ending marriages or getting sober. "There's nothing that's phony about him," comments one pilgrim about Kumare, who of course is phony.

Since Gandhi's plan, telegraphed from the start, is to ultimately confess his imposture to an assembly of his nearest followers, what will happen with the revelation of the holy hoax to those who have invested so much emotionally?

Gandhi surprises himself finding that maybe there is spiritual (or at least positive-thinking) value in the philosophies and `wisdom' he imparts, even as an impish spoof of a trendy messiah (in at least a few cases he seems to be slipping into sheer schtick with his preaching, a la Ali G or Borat). His pilgrims do indeed seem to be profiting from listening to the false prophet (some of Carlos Casteneda's apologists say the same about his almost certainly fictionalized shaman Don Juan). So is Gandhi/Kumare really all that bad?

I must say, I was worrying if I wasn't being suckered too. It's a sign of our `reality TV'-wrecked times, with all the scripted and contrived "nonfiction" junk around, that I had to wonder about this film, even as Gandhi's fascinating social experiment pulled me in. The multi-camera presentation is so slick, and the Sedona-centric yogi groupies so achingly sincere, attractive and straight from Central Casting, that I just had to wonder if this documentary wasn't itself reality-TV scripted and contrived behind the scenes. Thus making it a counterfeit about a counterfeit (as in Welles' F FOR FAKE). And would that really be all that bad?

If KUMARE is a fraud, word hasn't reached me yet. And it did in deed provide food for thought, about fake and `real' miracle-men religious leaders, about Sai Baba, about the late Rev. Moon, the various televangelists and megachurch pastors, some fallen and some still raking in the bucks, and - why not? - Barack Obama. Maybe they didn't intend to be in the faith-and-hope business long-term either but ended up falling for their own schtick. I don't know how/if Sacha Baron Cohen stays quite sane either. (3 1/2 out of 4 stars)