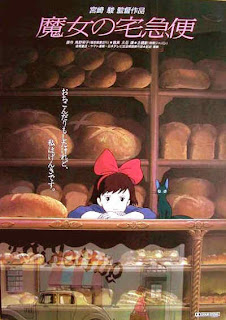 I can’t imagine University Circle after dark ever being a place for kids – unless they’re cut into sections and displayed floating in formaldehyde in a new Damien Hirst retrospective at the remodeled MOCA, or sold on the human-traffic market by CWRU-enrolled parents that desperate to pay off the interest on their student loans. But every once in a while the Cleveland Cinematheque shows a quality children’s movie at special admission rates, and there’s a particularly highly recommended one this weekend.

Derived from a pre-existing novel (not written by Miyazaki), it’s a truly charming tale, set in some alternate ideal of 20th-century Europe of yesteryear(dig the wonderful retro girl-group J-pop theme song). Here dirigibles still fly, schooners sit at anchor, and witches are a benign and accepted (but rare) part of society.

The title character is a 13-year-old witch trainee, not the least bit Goth, in a successful good-witch family, taking her traditional year off to grow up, relocate to a faraway Graustarkian city and support herself. Kiki (with her talking black cat Jiji) takes a room in a rustic residence over a young family running a bakery, and, since her only magical power is flying on a broomstick, she sort of falls into the role of an airborne courier. Though her first few gigs are harried and slapsticky and business is uncertain. Kiki makes quirky new friends among the residents, and though self-doubts about herself and her enterprise arise, this is no standard cartoon kiddie picture. It avoid the standard clichés of dumb villains, workaholic parents, pseudo-Broadway song-and-dance numbers and celebrity voiceovers doing post-modern wisecracks and hip-hop jokes. It’s a real charmer, even with a somewhat contrived-disaster ending arranged to allow Kiki to show her true worth to the populace and put over a sweet-natured girl-power message to the audience.

Some year’s after this film’s initial release, Disney formed an alliance with Miyazaki's Studio Ghibli and released a English-dub of KIKI’S DELIVERY SERVICE, featuring American stars as Debbie Reynolds and the soon-to-be-murdered Not Ready For Prime Time Player Phil Hartman. I presume the Cinematheque is showing the Japanese-language original instead; hope the little brats appreciate it, in between text-messaging that they’d rather be watching Power Rangers.

One good reason for watching this on the big screen: I have it on good authority that Miyazaki insinuated some of his past characters into the crowd scenes as cameos. I’ve seen the picture twice on video and haven’t noticed them (I would think master thief Lupin would have stood out especially), but I’m a round-eyed foreign-devil barbarian, so what do I know? According to my anime sources, when MAJO NO TAKKYUBIN became a big hit in Japan a real-life Japanese courier corporation who allowed some of their trademarked phrases to appear in the movie got a nice lift out of it, a la Reeses Pieces appearing in E.T. – THE EXTRATERRESTRIAL. Well, they earned it. (3 ½ out of 4 stars)
Posted by Charles Cassady Jr. at 8:38 AM