If you or a loved one is suffering from addiction to crack, always remember that you can always seek crack rehabs that can help you deal with this problem.


[KEEP THE LIGHTS ON opens in Cleveland on Friday October 26th exclusively at the Capitol Theatre.] 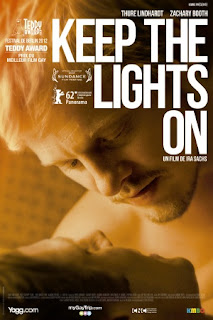 Erik (Thure Lindhart) is an up and coming filmmaker in his thirties whose chances of making it may well have passed him by. When he isn't working on his documentary about 1950's gay underground filmmaker Avery Willard, Erik is generally on gay phone sex lines or engaging in casual one night stands. Then he meets Paul (Zachary Booth), a lawyer for a publishing company, and things start to get serious.
Erik thinks he's found the perfect guy. Paul even dumps his girlfriend for him. But Paul has other baggage as Erik soon discovers – he's a crack addict. For the next decade the couple will try to deal with Paul's addiction, breaking up, getting back together again, and generally carrying on a dysfunctional relationship that has its good points, but ultimately doesn't seem all that healthy.


Although this is a very well made film and the performances are splendid, sitting through almost two hours of middle class gay artist angst with no real payoff probably isn't isn't most viewer's cup of tea. The fairly explicit sex scenes are sure to alienate some viewers, too. Even beyond that, though, there's nothing of any real substance here on either the subject of addiction or the nature of relationships gay or otherwise. KEEP THE LIGHTS ON is essentially a semi-autobiographical memoir (writer/director Ira Sachs = Erik, more or less), and it certainly does feel authentic.  The question is, what's the point, and why does it take Sachs so long to get there?