[HOW TO SURVIVE A PLAGUE opens in Cleveland on Friday October 12th exclusively at the Cedar Lee Theatre.] 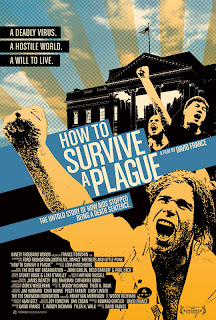 The origins of AIDS activist group ACT UP and the effect they had on changing American policy towards the disease are the subject of the documentary HOW TO SURVIVE A PLAGUE. While the disease still hasn't been cured, the treatments now available allow those infected to live longer and with a fairly good quality of life. It's easy to forget that when AIDS first arrived in this country in the mid eighties, it was pretty much a death sentence, and one that often got carried out quickly.

The story is told through vintage footage of protests and meetings with doctors, government officials, and even religious groups. There are also present day interviews with surviving ACT UP members and other parties who were involved. At times the group's tactics can seem a bit extreme, like when they protest at a Catholic mass. Then again, given the Church in New York's very public stance against safe sex education and the use of condoms, even going so far as to state that condom use would increase the spread of AIDS rather than prevent it, it's perhaps understandable.


In contrast to the often volatile nature of their protest tactics, the film shows us how ACT UP also made a concerted effort to learn about the medical and scientific issues surrounding AIDS so that when they were able to reach the people with the power to help, they could effectively communicate what they wanted and why. That doesn't mean mistakes weren't made along the way, and at one point the group starts to descend into factionalism and infighting, but eventually their work paid off. I would have liked to have seen more about the criticism leveled against the group even by members of the LGBT and AIDS communities at the time. Whether or not one feels the group's tactics were justified, that's still a part of the story that bears telling.

Overall, though, the film does a good job of preserving an important part of recent history. The archival footage and modern day interviews are integrated extremely well, and there's a lot here that even someone who lived through the era has forgotten. Perhaps one of the most interesting segments of that kind was a bit of the show “Crossfire” in which a ACT UP member Peter Staley squares off against liberal Tom Braden and conservative Pat Buchanan. Believe it or not, Buchanan is actually more sympathetic to the group's cause, although he's predictably aghast when Staley says he would tell a hypothetical younger brother to use condoms rather than advocate abstinence. 3 out of 4 stars.