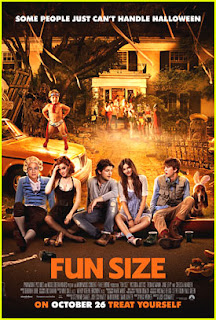 Having already portrayed two other cities in films this year (New York in THE AVENGERS and Detroit in ALEX CROSS), for Halloween Cleveland gets to dress up as itself in FUN SIZE. Aside from one or two self deprecating comments from its heroine early on, the old hometown actually comes off looking pretty good, too. Much in the way those “boudoir photography”places can make just about anyone look like a porn star with the right angles, lighting, and makeup, FUN SIZE uses slick cinematography and carefully chosen locations (some, to be fair, actually in Cleveland Heights and Lakewood) to make Cleveland look like a vibrant party town. And of course it really is, depending on how you look at it, since the fun spots the film visits on East 4th Street and Coventry Boulevard really do exist, and really are lively and fun. Call this the feature length antidote to that (admittedly funny) “Hastily Made Cleveland Tourism Video” from a few years back.


The film takes place on Halloween night in Cleveland, and although teenage Wren (Victoria Justice) is still trying to cope with the death of her father, she's looking forward to attending the party being thrown by Aaron (Thomas McDonell), one of the most popular guys in her school. Despite the fact that Wren is a bit of a nerd (in the Hollywood sense where she's actually very attractive and not at all socially awkward, but somehow still designated as an outsider), Aaron apparently has a crush on her. Unfortunately Wren's mom (Chelsea Handler) is dealing with the loss of Wren's father in her own way, which involves dressing up in a Britney Spears school girl costume and going to a party with her young boyfriend Keevin (Josh Pence). So Wren gets stuck taking her little brother Albert (Jason Nicoll), who has chose not to talk, trick or treating, much to the chagrin of Wren's best friend April (Jane Levy).

The actual plot gets set in motion when Wren loses her brother and has to enlist the help of nerdy (in a more real sense) friend Roosavelt (Thomas Mann), who of course has an unspoken crush on Wren, and his buddy Peng (Osric Chau). Meanwhile Albert, dressed as Spider-Man with a severed arm, joins forces with heartbroken convenience store clerk Fuzzy (Thomas Middleditch) to tee-pee his ex-girlfriend's apartment. Many madcap and zany adventures ensue.

FUN SIZE is very much in the vein of 80's teen and adolescent comedies like ADVENTURES IN BABYSITTING (which also had a young cast member dressed up as a Marvel superhero) and SIXTEEN CANDLES. Although the film does feel a bit cluttered and ragged around the edges at times, perhaps an inevitability given all its characters and subplots, it's impressive just how well it does juggle everything. The cast mentioned in the first two paragraphs of this review is just the tip of the iceberg, with many other bit players getting memorable moments over the course of the film's running time including Johnny Knoxville as an MMA fighter who makes the mistake of stealing Albert's candy, and SNL alums Ana Gasteyer and Abby Elliot as Roosavelt's moms.

For the most part, movies like this don't have to be great; they just have to entertain their target audience and do it on a small enough budget to guarantee a profit. When they're actually smart and clever and include some kind of subtext (in this case, dealing with the loss of loved ones) that gets handled in a sincere and completely unsappy way, that's going above and beyond the call of duty. I don't want to oversell or undersell this movie; it isn't a classic for the ages, but it is entertaining and considerably less stupid and annoying than most of the films aimed at teens and tweens these days. Even if you are legally old enough to drink and not yet the parent of a surly teen of your own, you might still get more than a few laughs out of this one to make it worth seeing. 2 1/2 out of 4 stars.
Posted by Bob Ignizio at 12:01 AM