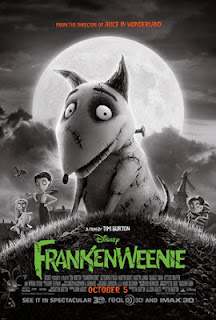 Anyone who’s lost a pet will identify with FRANKENWEENIE’s misguided ten-year old antihero.

My golden retriever, Murphy, was hit by a car in 1988.  For a while, it was hard to tell who the accident hurt more:  The dog, or me and my brothers.

Equal parts homage and parody, Tim Burton’s new black and white stop-motion 3D fantasy FRANKENWEENIE salutes the iconic monsters appearing in Universal Studios films circa 1925-1960, including Frankenstein, Dracula, and The Mummy.  The picture is also a retread of ’s own live-action short from 1984, which Disney / deemed too scary for children.

Of course, has since scored several blockbusters and offbeat hits, including BEETLEJUICE, BATMAN, ALICE IN WONDERLAND, and CHARLIE AND THE CHOCOLATE FACTORY.  So Disney, who fired over that first FRANKENWEENIE, had no problem welcoming back their prodigal son.

FRANKENWEENIE looks and feels like a movie.  The stop-motion puppets have round heads and big eyes with tiny black pupils, like the characters in A NIGHTMARE BEFORE CHRISTMAS and CORPSE BRIDE.  ’s sliver-slim protagonists usually have good intentions, but find themselves playing clean-up after exercising too much bad judgment.

Victor is unable to let go when his pooch dies suddenly.  Inspired by his new science teacher, Mr. Rzykruski (Martin Landau), he makes like the mad doctor in Mary Shelley’s novel and reanimates the dead with a little high voltage.  He later realizes the electrical experiment worked only because his heart was in the right place; he just wanted his dog back.

New ’s annual “Dutch Day” is ruined after an entourage of creepy classmates purloins Victor’s methods for their own science projects.  Think GREMLINS or ALIEN VS. PREDATOR: REQUIEM, and you’ll get an idea of the monster mayhem.  These kids (and their pets) are daffy doppelgangers for Universal’s old-school ghouls:  Squirrely Edgar has scoliosis—like the Hunchback of Notre Dame—and behaves like the subservient lab assistant found in so many monster flicks.  Nassor is a prim, stuffy boy with a crypt keeper’s charm.  The unblinking blonde “Weird Girl” has a housecat with a mean streak.  Elsa van Helsing (Winona Ryder) is a “goth girl” who sympathizes with Victor, and whose black poodle becomes the skunk-headed “bride” to Victor’s canine creation.

New could be anywhere.  Several states—including , , and —have such towns.  ’s quaint suburbia boasts a multistory town hall, whose windowless façade embodies a faceless bureaucracy, but its main landmark is a windmill (like the one in FRANKENSTEIN).  Several characters live in ranch-style tract homes with 1950-60s décor and dress like Cleavers in Kennedy’s New Frontier, while others occupy bungalows with attics and gabled rooftops (from which to conduct lightning-centric experiments).  Victor’s mother is a dainty, Barbara Billingsley-type housewife who reads romance novels while vacuuming.  Ben Frankenstein enjoys shrimp and beef fondue while lecturing his son.

Yet Disney’s BAMBI (released in 1942) is playing at the New Holland cinema, and Christopher Lee is seen on television in his 1958 DRACULA guise.  Further distorting the time frame is one parent’s allusion to Pluto’s 2006 downgrade to dwarf planet status.  The few vehicles on display don’t help pinpoint what year it is.  This world lacks cell phones, digital cameras, computers; Victor uses a reel-to-reel projector and does his calculations on a blackboard.

’s fur-ball fairy tale indulges a few too many stereotypes.  Victor’s parents are concerned but coddling—his father is a distracted do-gooder and mom a curiously happy homemaker.  Their neighbor, the acting mayor, is your average crotchety, potbellied, “Get off my lawn” movie asshole.  The kids—like the aforementioned Elsa—are archetypes:  Bob is the fat kid, Toshiaki the intellectual Asian, “Weird Girl” the precocious (and possibly overmedicated) girly-girl.  The black kids would probably pander to stereotypes, too, were any featured.  It doesn’t help that has a supersized Kaiju monster (hello, Gamera) terrorize the lone Asian, like Godzilla stomping through .

FRANKENWEENIE has other animal abominations besides the titular terrier, but we won’t reveal too much.  They’re profiled on the movie’s website if you’re worried the Were-Rat, Invisible Fish, Vampire Cat, or Mummy Hamster might scare little Kaylee.

Ah, but everyone’s entitled to a good scare on Halloween (to quote a John Carpenter classic).

FRANKENWEENIE is mildly entertaining, but it’s no laugh riot.  My favorite scene was Sparky’s ten-minute resurrection, which occurs (necessarily) on a rainy night, and which features no dialogue whatsoever—a no-no for today’s noisy, hyperkinetic kid-features.  The puppet work is quite marvelous, and the total “look” of the film rather striking.  Too bad they don’t serve a stronger story.

Perhaps unsurprisingly, sends mixed messages about mortality.  Kids might go home with the mistaken impression death is an event they need not accept—be it that of a pooch or a Papa.  So, if you walk in assuming Victor (and your child) will learn a thing or too about playing God or tampering with nature, well….