[ESCAPE FIRE: THE FIGHT TO RESCUE AMERICAN HEALTHCARE opens in Cleveland on Friday October 5 th exclusively at the Cedar Lee Theatre. Drs. Arthur Lavin, Peter Degolia, Dena Magoulias, and Eric Schreiber from Doctors for Health Care Solutions will be present to answer questions on Saturday, October 6th following the 7:20 pm showing. Dr. Nissen from the Cleveland Clinic will be present on Sunday, October 7th following the 4:50 pm showing for a Q&A and will introduce the the 7:20 pm show.] 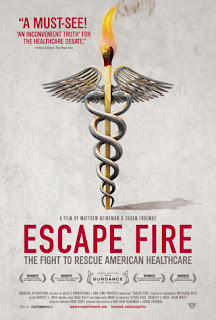 The documentary ESCAPE FIRE makes the case that, whether you believe in a socialized single-payer health care system or prefer a more market-driven approach to coverage, there are some underlying issues in America's health care system that can and should be addressed. The chief among these, the film posits, is that American health care is really more about disease management. The system currently focuses on treating symptoms, prescribing medication and/or recommending surgery after individuals are already ill rather than focusing on preventative care, which is both cheaper and more effective.

Cleveland, Ohio may not lead the nation in successful sports teams or job opportunities (just read any random post on this site from Charles Cassady, Jr. for more on that side of things), but we do at least have the Cleveland Clinic, which ESCAPE FIRE puts forward as something of a model for how the American health care system could and should work. It's an opinion apparently shared by both Mitt Romney and Barack Obama, both of whom lauded the institution in this past Wednesday's debates. Some of the things the Clinic does that increase efficiency and positive outcomes include making sure redundant tests aren't done and paying their physicians a set salary rather than basing compensation on the number of procedures they perform or patients they see.

The movie also spends a fair amount of time on alternative medicine like acupuncture, and Dr. Dean Ornish puts forth his belief that a low-carb vegetarian diet can reverse certain health conditions, including heart disease and some cancers. While the scientific evidence for acupuncture as a pain treatment is fairly strong, there are some valid issues with Ornish's research, and it would have been nice if the film had mentioned this. Still, it's not as if Ornish's dietary recommendations are going to hurt anyone, and given the average American diet, they'll likely be an improvement for most. Look, I'm not here to be your source of scientific knowledge; I'm here to review this movie. I'm just saying do a little research on the claims in this (or any movie that purports to be giving you factual information) before you incorporate them into your belief system and lifestyle.

My objections to a few cases of questionable science aside, this is an interesting film that explores some of the issues with America's health care system than generally haven't been talked about by either party. The fact that we as a nation spend so much more per person on health care and yet have a far worse outcome than every other western nation should tell us that something isn't working right. Clearly something has to change, and while one can argue about the specifics, the general idea that our focus needs to shift from a treatment model to one of prevention just makes good sense. 3 out of 4 stars.