Dune (October 11th and 12th at the Cleveland Cinematheque) 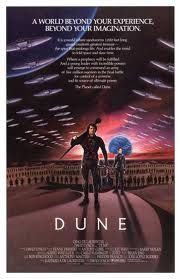 Somewhere in my archives abides a glossy, tissue-thin piece of 8x10 paper. If I ever came across it I wonder if wouldn't crumble at my touch like a relic from a Dan Brown novel.  I got it at the premiere screening of David Lynch's DUNE back in 1984. My whole family went to see this release together, all of us having read the Frank Herbert fascinating source novel (not because of a community-reads assignment or book club or weird religious cult; we're just superior, I guess).

Not too much earlier we had gone to see the "stupendous" wrap up of the Star Wars saga, RETURN OF THE JEDI and gone away immensely disappointed. This is all you've got, George Lucas? Ewoks? Something named Sy Snoodles in the credits? Jabba the Hutt's got a piano-playing blue elephant? And instead of blowing up a Death Star at the end...you just blew up a bigger Death Star? Really? That's what we paid our $4 for? (sob)

Exiting that disappointment (not nearly the letdown that THE PHANTOM MENACE was going to be in 1999, but at least I got paid to cover that one) I told my shattered family don't worry, there's going to be a tremendous, wonderful, spectacular celluloid version of Dune coming out next year. But o my brothers, when we came to the theater for the big DUNE rollout (which, yes, is an obscure sci-fi pun; shoutout to Judy Ditky), I saw the ushers handing out those flimsy sheets of paper. And when I read one, some little piece of me, like Obi-Wan Kenobi, had a baaaad feeling about this.

For those sheets of paper were glossaries. Glossaries, dammit Jim! Mass-produced by Universal Pictures to clarify for the moviegoers, presumably unfamiliar with Frank Herbert's books, what exactly a Bene Gesserit was, or "melange," or a Padishah Emperor Shaddam IV. That's how desperate the producers were, aware that mere mortal muggles of the ticket-buying public would have little chance otherwise of figuring out was going on from the weird, lumpy adaptation of Herbert's saga that Lynch had delivered.

I'll try to summarize: in the far future of Year 10,191, spacegoing humanity, somewhat resembling Islam, has a feudal-style culture (shaped especially by a religious-law ban on nearly all computer/data technology, a big deal in the novels that the movie doesn't make at all clear). One of the ruling class' most noble clans, the Atreides, have been ordered by the Emperor to relocate to the desert world Arakis. Ostensibly it's a promotion, because Arakis, AKA Dune, possesses a unique ecosystem that generates the "spice" drug melange, the most precious substance anywhere because it allows advanced mental techniques and the biological ability to send ships traveling across the universe via mere thought. But it's excreted by monstrous, almost godlike worms, miles long and very, very, dangerous to harvest.

In reality, though, the big palace move is a behind-the-scenes strategy by the Atreides' mortal enemies, the perverse and sadistic Harkonnens, to maneuver the Atreides and their family army into terrain where they can be more easily attacked and wiped out. But there's a conspiracy-behind-the-conspiracy aimed at the chosen-one figure of noble scion Paul Atreides (Kyle MacLachlan). Only on Arakis, among the deep desert-dwelling natives (think Bedouin Arabs) can he attain his secret destiny as a prophesied messiah.

Some time later, in 2000, the Sci Fi Channel - before it would become SyFy and air stuff in the nature of "Sandworm vs. Tarantulazilla" - transformed Herbert's early Dune novels into a miniseries. I never saw it and can only assume that the luxury of a longer run-time (not to mention CGI f/x a bit beyond the iffy modelwork-miniatures of 1984) rendered the narrative more lucid. As for David Lynch, he stumbled out of the gate, in my opinion, but having much expository stuff (and even lots of non-expository stuff) written as voiceover-narration and interior monologues, over the impassive/bewildered faces of international actors like Max Von Sydow, Dean Stockwell, Jose Ferrer, Sean Young, Sylvana Mangano, Francesca Annis and Linda Hunt, all playing two-dimensional characters who never engage us, even though they've got fresco-like visual Lynch-appeal all right (Sting flexing his wiry, whiplike body as evil prince Feyd Rautha).

Word is that Lynch brought in an original cut running five hours. Universal's vise-squeezed theatrical release ran 135 minutes, and premiered to near-universal (hah) pans, from critics and fans (and my parents) alike, for its shambling pace, fake-looking sandworms and utterly baffling finale. So much for glossaries. In the sci-fi heavy 1980s, the David Lynch DUNE sank like a stone; maybe only HOWARD THE DUCK had a worse reception.

The Moorish production design and costumes, more Arabian Nights than LucasFilm (though Lucas was getting there), got the best writeups. And it is well-known geek-historical fact that Hollywood had been intending to do a Dune adaptation for a long while, at one point tapping cult-mystic filmmaker Alejandro Jodorowski (EL TOPO), who wanted Orson Welles for the villainous fat guy Baron Harkonnen. That one got as far as hiring some of the most visionary fantasy artists of the 1970s to come up with four distinct planetary environments; check out the published portfolios of painters Chris Foss and H.R. Giger to see their suggestions. It would have been an eyeful all right. It would also likely have been an unholy mess.

There's an insult-to-injury postscript to the 1984 film. When the producers tried to recoup their investment at the end of the decade they used Lynch's hours of discarded footage to repack DUNE for television broadcasts, as a two-parter. I suspect there was little motivation to do right by Frank Herbert (who died in 1986); a bigger reason might have been the sudden ascent to stardom of a then little-known Shakespearean trouper named Patrick Stewart, who had just toplined in the successful relaunch Star Trek: The Next Generation. Stewart played supporting House Atreides good guy Gurney Halleck in DUNE, but many of his scenes had been scissored in the frazzled post-production. Suddenly, presto! Here's Jean-Luc Picard, back again. And, just by chance I'd wager, that restored a great deal of the story's coherency (and one showstopper of a Carlo Rambaldi creature sequence showing the "milking" of an infant sandworm). On the down side, there was a "prologue" explaining the whys and wherefores of the mythology using slapdash paintings (and not by Chris Foss or H.R. Giger either). Probably cheaper than mailing out millions of glossaries, at any rate.

David Lynch, who on the whole does not count DUNE as a good experience, was quite upset, and the Director's Guild substituted his credit with the infamous pseudonym "Allen Smithee." You can find the Smithee DUNE in the bootleg-video underground; check it out sometime.

Either way, what impresses me about the picture is its sheer other-worldliness and inscrutability. It really does look like something teleported here from an alien culture, pageant-like and addressing different values altogether than what the main thrust of commercial SF in the Reagan Era was - cloning STAR WARS and selling action figures. Funny thing is, DUNE mogul Dino DiLaurentiis previously went in the same eccentric path when he produced the goofy, retro-1980 Mike Hodges-directed FLASH GORDON. That one also kinda bombed, but it has found a cult appreciation over the years, while DUNE is still a bit in the loss column. Of course, FLASH GORDON had a Queen soundtrack. DUNE's is by Toto. Hey, check out Toto's vintage B&W music-video for "Stranger in Town," starring DUNE castmate Brad Dourif in a mini-edition of WHISTLE DOWN THE WIND. Also from 1984!. Toto rules! Toto is the Kwisach Hadrach! Yes, this is why I have no friends.

I am not alone in being sort of a DUNE-atic. John Nichols' and John Clute's mighty Encyclopedia of Science Fiction (where I applied to work; they never responded to my inquiry, like most others) writes "it may be time to reappraise DUNE...Bits of this bad film are close to masterful." And it is indeed consistent, in the David Lynch canon, with traditional Lynchian themes of body fluids, dreams and nightmares and non-sequitur grotesque stuff (my brother was freaked out by the Harkonnen sphynx cat, in particular), imagery worthy of ERASERHEAD and TWIN PEAKS. Remarkably, after this bomb, Dino DiLaurentiis went ahead and produced Lynch's next movie, also starring Kyle MacLachlan - BLUE VELVET, which thoroughly rehabilitated the guy's reputation.

Finally, the amazing DUNE fun fact. David Lynch, coming off THE ELEPHANT MAN and a hot commodity, was, for a while, supposed to be the hired-gun director George Lucas wanted for...RETURN OF THE JEDI. Yes, he was (Richard Marquand instead got the helm). But he directed DUNE instead. Smeg, can you imagine David Lynch wrapping up the Skywalker saga? Could have killed the franchise right there (not an entirely bad idea...), except for Thursday-night revivals at the Cleveland Cinematheque. I can't see David Lynch wanting to do Ewoks. Or Sy Snoodles. Or Jar-Jar Binks. (2 1/4 out of 4 stars)
Posted by Charles Cassady Jr. at 12:20 AM