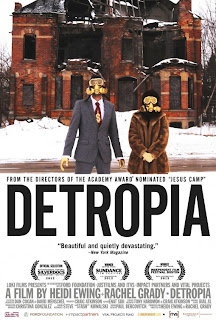 Two of the best documentaries in recent years, THE SKY TURNS and SLEEP FURIOUSLY, were poetic observations of small towns fading into oblivion. Heidi Ewing and Rachael Grady's DETROPIA comes close to doing the same thing for the American metropolis of Detroit. Once the fastest growing city in the U.S., it is at the time of this documentary's filming the fastest shrinking. Once a bustling manufacturing town, Detroit is now a landscape of vacant factories and homes. Yet for a film about a city in decay, DETROPIA is at times hauntingly beautiful. It's also, for all its emphasis on aesthetics, a very human film.

DETROPIA doesn't try to create some contrived narrative arc; it simply shows us various Detroit residents sharing their stories as they try to hang on. Video blogger/urban explorer Crystal Starr documents some of the city's once beautiful structures before they get torn down; Union president George McGreggor tries vainly to prevent the last American Axle plant actually located in America from moving to Mexico; retired school teacher turned bar owner Tommy Stephens does his best to stay optimistic that the jobs, and his customers, will come back; the show must go on at the Detroit Opera House despite the looming threat of losing its funding if the big 3 automakers go under.


Young artist types are about the only new residents moving to the city, brought there by the availability of cheap loft space. There's only so much call for Bohos taking photos of themselves wearing gold gas masks, though. Meanwhile the mayor weighs the pros and cons of “rightsizing” the city by relocating residents and reclaiming land for urban farming. Offering an ironic counterpoint to all of this is old footage of Detroits imagined Utopian future produced by the car companies.

It's no spoiler to say that a ray of light finally shines through with the auto company bailout, which restores some of the lost manufacturing jobs. Whether the resurgence will hold in the long term remains to be seen. Stephens discusses the much cheaper Chinese-made alternatives to the Chevy Volt with representatives of the Detroit companies who dismiss them as junk. As Stephens reminds them, that's what they used to say about Honda.

With so many documentaries these days consisting of some smart ass filmmaker inserting him or herself directly into the film, or else  yet another tired parade of talking heads sitting in chairs intercut with stock footage, it's nice to see a documentary where the filmmakers actually went out into the world and captured it on film first hand. Ewing and Grady allow their subjects and images to speak for themselves without too much artifice or commentary, but they do manage to subtly get across their views about the problems Detroit faces, and how that applies to the country as a whole.  4 out of 4 stars.
Posted by Bob Ignizio at 12:01 AM