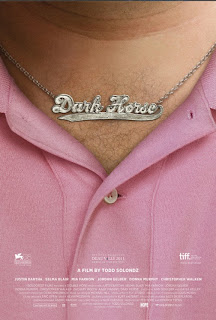 Todd Solodnz delivers yet another twisted comedy with his latest film DARK HORSE. The film seems to center around thirtysomething Abe (Jordan Gelber), the proverbial guy who still lives with his parents (Christopher Walken and Mia Farrow) and collects comic books or records or baseball cards or, in this case, action figures. Abe has a job at the company his father owns, but doesn't exactly apply himself. His only plans for the future are to wait until his parents move to Florida, at which point he assumes they will give him their home. In other words, this guy isn't exactly what you'd call a “good catch”.

Then again, neither is Miranda (Selma Blair), a failed writer with hepatitis B and a clingy ex boyfriend (Aasif Mandvi). The two meet at a wedding where keeps hammering Miranda for her phone number until she finally relents. After one date, he proposes marriage. At first this seems to have backfired, as one might assume it would. However, after giving it some thought, Miranda decides to accept. Things go considerably downhill for Abe from here.


Even though portions of DARK HORSE are clearly meant to be fantasy, there's a believability to a lot of the film in spite of its absurdities. The real question is, whose fantasies are we seeing? Are they Abe's, or are they those of his co-worker Marie (Donna Murphy), who appears in several obviously unreal segments as a sexually aggressive cougar who wants Abe for herself? The film runs out of gas a bit towards the end, but there are enough laughs and WTF moments along the way to make the trip worth taking. 3 out of 4 stars.
Posted by Bob Ignizio at 12:01 AM