Butter (Now playing in Cleveland exclusively at the Capitol Theatre)

[BUTTER is now playing in Cleveland exclusively at the Capitol Theatre.] 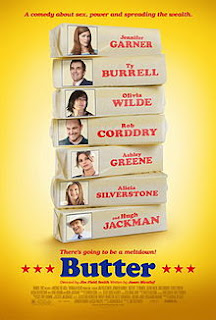 The cliched realities of suburban Midwest life are all too familiar these days thanks to films like AMERICAN BEAUTY and BLUE VELVET. BUTTER falls flat stepping into this well traveled area. It attempts to satirize the underpinnings of suburbia but the humor is lackluster at best.

There are two winding narratives in BUTTER, that of the Pickler family and that of Destiny, a young African American orphan. Bob Pickler (Ty Burrell) is a renowned butter sculptor in small town Iowa. When asked to step down, his wife, Laura Pickler (Jennifer Garner), decides she will continue the Pickler legacy and signs herself up for the competition.

The introduction of Destiny (Yara Shahidi) was confusing at best thanks to the amateurish editing. After watching the Picklers’ discuss butter sculpting on local television, she decides to attend one of the exhibitions. While at the exhibition, she enters one of the coolers showcasing Bob Pickler’s rendition of the Last Supper. She finds the Holy Grail half finished and completes it herself. Bob catches her in the act and, impressed by her skill, uses the goblet in his piece. This fuels Destiny’s interest in butter carving and, shortly after being taken in by another foster couple, she decides to enter the contest herself.

At one point Destiny makes an odd comment about wanting to be adopted by the idyllic Pickler family. This comment was a half hearted attempt at dramatic irony. As the audience, we know that their superficial small-town glamour was simply covering a collection of dysfunctions. Unfortunately Destiny’s sentiment ends up being another loose end that’s never acknowledged beyond this point. This is part of a larger problem as the film is frequently unclear with its direction. For example, the film opens with Laura Pickler running for governor but the significance is obscured until the film’s awkward conclusion. By that point, the inciting incident is so far removed that its explanation seems glossed over and forcefully inserted. This ultimately makes the ending feel rushed and lazy.

Of course, this bookending of BUTTER with Laura’s political campaign is supposed to set the film up as a metaphor for the 2008 Iowa caucus debate between Obama and Clinton. However, this metaphor completely misses its mark. It’s obvious that Destiny was Obama and Laura, Clinton. Unfortunately, Laura was a completely unlikable character who tended to play dirty. At one point she lies to get a butter sculpture rematch, which Destiny humbly accepts. Was this how the filmmaker felt about Clinton? Clinton’s political persona is radically different than the persona of Laura Pickler. Her character seems more akin to Sarah Palin. Thus, there was a major disconnect between the story and this forced, political subtext.

BUTTER is a film that goes in many different directions but doesn’t have the ability to tie them all together. The racial undercurrent, often expressed blatantly through Destiny’s internal monologues, seemed a cheap and obvious attempt at humor. The over the top raunchy stripper, Brooke (Olivia Wilde), was fun and provided some of the film’s best laughs.  However, by the second half, her presence became unnecessary as she was no longer needed to progress the narrative. This is similar to the film’s mistreatment of humor as it tends to kill the only decent jokes. Instead of letting the joke exist on its own, BUTTER hand-holds the viewer. The jokes are continuously over explained; what was funny at first quickly becomes annoying after being repeatedly harped on. It seems that the filmmakers didn’t trust the audience’s intelligence as the characters often speak the subtext and spell out the jokes. Furthermore, the humor suffers from awkward dialogue and sometimes stale delivery. Despite this, the performances were solid overall.

Ultimately, the film isn’t able to handle the many directions it tries to travel. Thus the audience is left with a convoluted mess that frustrates and disappoints. The performances weren’t horrible; though the characters were hardly interesting, their exaggerated natures had the potential to be funny but were simply annoying. Any promise that the film had was spoiled by poor writing, messy editing and lack of identity. I like to think of what could have been if the proper attention was given to only one of the rich subtexts. Unfortunately, ‘BUTTER’ was spread too thin.