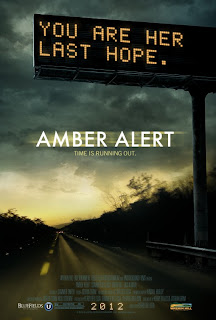 At this point, the “found footage” gimmick has ceased to be fresh. In fact, it now seems well on its way to becoming just another way of making a movie no more likely to raise eyebrows or draw attention than any other. Originally used almost exclusively by low budget horror films like THE BLAIR WITCH PROJECT, THE LAST EXORCISM, and PARANORMAL ACTIVITY, the technique has branched out of late with the sci-fi/superhero flick CHRONICLE and the teen sex comedy PROJECT X. Now with AMBER ALERT co-writer/director Kerry Bellessa has given us a found footage suspense thriller.

As is the case with most found footage films, AMBER ALERT has to create a situation where it makes sense for its protagonists to be video taping themselves. In this caseNate (Jasen Wade) and Samantha (Summer Bellessa), two long time platonic friends (although Nate obviously has a crush on Samantha) are making an audition tape for a reality show with Samantha's mostly unseen younger brother operating the camera. While out driving around acting goofy, Nate notices an electronic sign for an amber alert. He then notices that the car in front of them is a grey Honda, just like the one mentioned in the alert. Samantha is dismissive at first, but once the license plate number is verified, she becomes insistent that they do something to help.


Calling the police is the first step, but that's not good enough for Samantha, who is worried the cops won't show up in time. Now the two switch roles, with Nate insisting it's probably just a divorced dad who kept his kid a little bit past his allotted visitation time, while Samantha is certain it's a serial killer or child molester. After a good bit of the annoying arguing of the sort that seems mandatory in these found footage films,Samantha gets her way and Nate agrees to tail the car, leading them deeper and deeper into potential danger.

The problems with AMBER ALERT are essentially the same that one finds in a lot of found footage films. First and foremost, Nate and Samantha are both kind of snarky and annoying, which makes it less than a joy to spend a solid hour and twenty minutes in their company. There's also the usual long stretches of inane nothing that are apparently necessary to create the illusion we're watching genuine home video footage.

Aside from those issues inherent in the film's technique, there's also the “idiot plot” aspect often found in the thriller genre. As originally defined by James Blish (and popularized by Siskel and Ebert), that's, “any plot containing problems which would be solved instantly if all of the characters were not idiots.” Certainly some good movies have been made using the idiot plot, but you need first rate direction and tight editing for that to happen, neither of which are present here. AMBER ALERT is at best an okay film of its kind, and now that the found footage gimmick has become so ubiquitous, okay just isn't good enough. 2 out of 4 stars.
Posted by Bob Ignizio at 11:03 AM