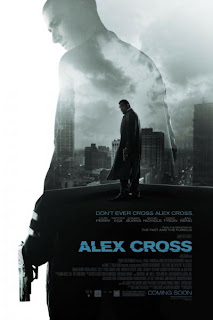 Detective/psychologist Alex Cross (played by Tyler Perry, he of all those “Madea” plays and movies) has observational skills that appear to rival those of Sherlock Holmes. Sadly, his abilities have made him more than a bit cocky, which leads to tragedy after Cross stops cold blooded assassin Picasso (Matthew Fox) from killing his target. Cross figures the killer for a professional primarily interested in taking out Detroit businessman Leon Mercier (Jean Reno). He's not prepared when Picaso makes things personal by going after Cross's wife Maria (Carmen Ejogo) and Monica (Rachael Nichols), an officer on Cross' team. Keeping the chain of cause and effect going, this sends Cross and his partner (and best friend since grade school) Tommy (Edward Burns) off on a mission of vengeance to take down the psychopathic hit-man.

This isn't the first cinematic outing for Cross. Morgan Freeman played the character in ALONG CAME A SPIDER and KISS THE GIRLS, but even if this weren't a more action heavy film than those two he'd be too old to continue in the part. Perry does a good job stepping into the role when he's in action hero mode chasing after the bad guy, but he comes up short in more emotional scenes. When tragedy strikes, there's nothing in Perry's performance that conveys genuine grief. It's not that he seems numbed by events; he's just cold. That may well have been the way it was written in the script, but one can't help but think if Freeman were here, he'd at least have managed to show his character's loss with an expression or in the way he carries himself, knowing that the audience needs to feel that sense of humanity in its protagonist.

As for Fox, I'm not sure if his performance is technically “good”, but the guy definitely swings for the fences. His Picaso is sort of a leaner, meaner version of Robert DeNiro's Max Cady from CAPE FEAR. It's hard to imagine such an unstable individual finding employment as a professional assassin where cool detachment is a necessary component of the job, but at least he's fun to watch..

That's more than can be said for the movie over all. The script is so utterly pedestrian and the direction by Rob Cohen so bland, you may find yourself wishing for Perry to put on his old lady drag to dispense justice as Madea. That would at least have been a surprise, and a hell of a lot more entertaining than anything in the actual movie. Further hampering the fun factor is the undercurrent of casual misogyny running through the film. SPOILER ALERT: Every major adult female character in the movie (other than Cross' grandmother, played by Cicely Tyson who deserves better than this) apparently exists only to die, preferably by horrible torture, so they can motivate the heroes.

ALEX CROSS is completely unoriginal and mediocre at every level. The nicest thing I can say about the movie is that it has the good sense not to go past the ninety minute mark. And I guess it gets points for doing a lot of its principal shooting in Cleveland, resulting in some Hollywood money being injected into the local economy. If you're just looking to see some Cleveland real estate in a movie, though, you're probably better off watching THE AVENGERS again, or waiting about a month for Ted Turner to start running A CHRISTMAS STORY non stop on TV. 2 out of 4 stars.