360 (November 3rd and 4th at the Cleveland Cinemathque) 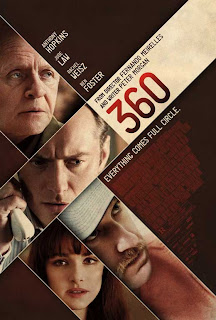 At the beginning of 360, newly minted call girl Mirka (Lucia Siposová) tells us that a wise man (Yogi Bera, as it turns out) once said, “when you come to a fork in the road, take it”. She then goes on to wonder what might have happened if she had taken a different fork at some point along the way. Based on this opening, one might expect the film to go back and examine her choices. Instead it turns into another one of those “we're all connected” movies, with the connections in this case having to do with infidelity (or at least the intent to commit infidelity) that crosses both class and geographical boundaries.

After an initial “interview” with her pimp in which she's accompanied by her disapproving sister Anna (Gabriela Marcinkova), Mirka soon gets her first client (Jude Law). He will eventually return home to his wife (Rachael Weisz) who is herself having an affair with a photographer (Juliano Cazarré). The photographer's wife (Maria Flor) finds out about the affair and leaves him before moving on to a potential encounter of her own. And so on and so on. Some of these meetings result in sex, some do not, although either way nobody seems particularly happy. The cast also includes Anthony Hopkins as a father both hoping and dreading that a recently discovered body might be that of his long missing daughter, and Ben Foster as a recovering sex offender.

As the film's title implies, the plot eventually comes full circle back to Mirka and her sister. In real life if you find yourself going around in circles, it means you're going nowhere and accomplishing nothing besides wasting time. Such is the case with 360 as well. None of the vignettes are interesting, and while the characters may well be connected to each other, it's doubtful any of them will connect with audience members.

Evidently screenwriter Peter Morgan thinks the interconnectedness theme is enough to hold our attention. Unfortunately for him, we've already seen it thoroughly explored in several movies in just the past decade (CRASH, MAGNOLIA, and BABEL to name a few of the more prominent ones), so the novelty has worn off. Director Fernando Meirelles (CITY OF GOD, THE CONSTANT GARDENER) seems to be working overtime to make up for the script's dullness by pouring on the style, but no matter how many segments he splits the screen into, what does it matter if there's nothing worth watching in any of them? 2 out of 4 stars.