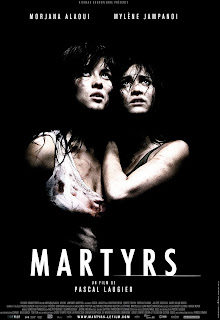 15 years ago a little girl escaped from an abandoned slaughterhouse where she had been chained to a chair and tortured. Now grown up, Lucie (Mylène Jampanoï) calls her only friend Anna (Morjana Alaoui) and says that she has tracked down her tormentors, a seemingly ordinary upper middle class family living in a nice home. Could these really be the people who tortured Lucie, or has she gone mad? Neither Anna nor the audience is sure. Still, Anna decides to stand by her friend, a decision that will ultimately take her on a journey of both horror and transcendence.


Writer/director Pascal Laugier has made one of the most uncompromising and original horror films in years in MARTYRS. He knows all the conventions of the horror genre and plays with them masterfully. Just when you think you know where MARTYRS is going, Laugier pulls the rug out from under you. The carefully conceived look of the film and its serious tone are obviously influenced by European horror films of the seventies and eighties, but Laugier never wears his influences on his sleeve or descends into trite homage. Rather, this is a wholly original film that channels the spirit of its influences into something relevant and contemporary.

That MARTYRS uses extreme violence and brutality to realize its vision will no doubt offend and disgust many viewers. Therefore it cannot be stressed strongly enough that if you are bothered by graphic depictions of violence, you should not watch this movie. Those who can get past that will find an intelligent and expertly made film that is surprisingly poignant in its own strange way. Part of the wave of horror movies pouring out of France in recent years, MARTYRS isn’t just a great horror movie – it’s a great movie, period.