RAW MEAT tells the story of the last living descendant of a group of workers who were trapped by a cave-in while building England’s subway system in the 1890s.  They managed to survive for generations thanks to air pockets and a diet consisting of the other other white meat, namely human flesh. 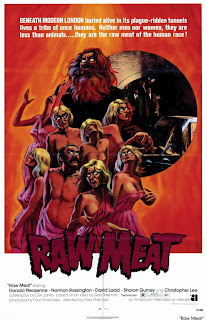 As RAW MEAT begins, the last living cannibal man (Hugh Armstrong) attacks a high-ranking British official, but is interrupted before he can haul the unconscious body back to his lair.  Alex (David Ladd) and Sharon (Patricia Wilson) spot the body, and despite Alex‘s protestations (he’s from New York--they just walk over people like that all the time) eventually get the police to investigate.  While checking to see if the unconscious man is a diabetic, Alex finds a card with the man’s name and rank as a member of the O.B.E.   Inspector Calhoun (Donald Pleasance) questions the couple, seeing a chance for prestige if he can solve the missing persons case of such an important figure.

Things don’t go too well for the cannibal man from here on.  First, his mate dies, and the movie does a good job of making the viewer feel empathy for him despite his culinary habits.  Then, he makes another attack, in the process receiving a serious wound to the side of his head.  Eventually he sets out to find another mate, but despite feeling compassion for this poor soul, Sharon is less than thrilled with the prospect of moving in to his subterranean love nest.  It’s up to her insensitive boyfriend and the coppers to save her now.


What makes this film stand out are the excellent performances and detail of characterization.  Donald Pleasance really excels here as the inspector, while Armstrong as the cannibal really makes you empathize with his plight even as he repels you. Even the young couple are more interesting than the typically bland horror protagonists one tends to fine in movies of this ilk.  Also of note is the excellent camerawork by Alex Thomson.  There’s one long tracking shot that is not only an impressive visual achievement, but also fills in a great deal of the back story without any dialogue.

This well written and expertly shot movie, originally titled DEATH LINE, was given a misleadingly lurid title and poster (while paradoxically being shorn of a few moments of onscreen gore) before being sent out on the exploitation circuit of the early seventies with little fanfare by AIP. Thankfully the home video release from MGM has restored this lost semi-classic to its uncut state. There still isn't all that much gore, certainly not on the level that fans of later cannibal movies like MAKE THEM DIE SLOWLY would be used to, but RAW MEAT doesn’t need to rely on the crutch of splatter. Rather than the gorefest its name implies, it’s a rare horror movie with both a brain and a heart.
Posted by Bob Ignizio at 12:00 AM