31 Days of Halloween 2012: Werewolves on Wheels (October 20th at the Grandview Theatre "Shock Around the Clock" horror marathon in Columbus, OH)

[WEREWOLVES ON WHEELS screens sometime between noon on Saturday October 20 th and noon on Sunday October 21 st at the Grandview Theatre in Columbus as part of their “Shock Around the Clock” horror film marathon. For more information visit www.horrormarathon.com.] 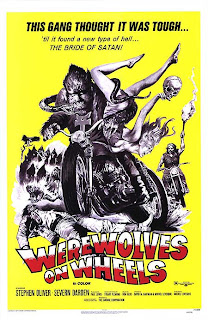 A gang of mean, dirty bastards called “The Devil’s Advocates” and their old ladies spend most of their time riding around on motorcycles and looking menacing.When they stop for gas, a bite to eat, and a little fun roughing up some of the locals, the gang’s resident mystic One (Severn Darden) does a Tarot reading for Helen (D.J. Anderson), the “old lady” of gang leader Adam (Stephen Oliver). One says he doesn’t read fortunes, just cards, but either way he sees death and doom ahead. An unimpressed Adam says, “We all know how we’re gonna’ die, baby. We’re gonna’ crash and burn.”

Eventually the gang comes across a Satanic church where some evil monks give them drugged bread and wine. The head monk then sacrifices a cat and says some mumbo jumbo which causes Helen to dance naked with a snake, resulting in a great scene that positively exudes sleaze, cartoon Satanism, and psychedelic hysteria. The gang eventually wakes up, trashes the ceremony, and hightails it out of there, but not before the power of Beelzebub has turned at least one of their number into a werewolf that knows no gang loyalty when in the throes of lycanthropic bloodlust.

By the standards of early seventies drive-in movies, WEREWOLVES ON WHEELS is well made, with mostly excellent cinematography, a fairly coherent screenplay, and solid acting. More importantly, you’ve got bikers beating up rednecks, chanting Devil worshippers, cat-blood drinking, naked snake dancing, werewolf attacks, and people getting set on fire. As a special bonus you also get Barry “Eve of Destruction” McGuire in a supporting role. And yes, the movie does live up to its name, although not until it’s almost over and not very well. By modern standards it can be a little slow moving at times, but I kind of like the laid back pace and extended shots of bikers riding down the highway while the cool instrumental fuzz rock soundtrack plays on. They just don't make 'em like this anymore.