31 Days of Halloween 2012: Shaun of the Dead (October 20th at the Capitol Theatre as part of the 3rd Annual 12 Hours of Terror)

[SHAUN OF THE DEAD screens sometime between 10:00 pm Saturday October 20th and 10 am Sunday October 21st at the Capitol Theatre as part of the 3rd Annual 12 Hours of Terror.] 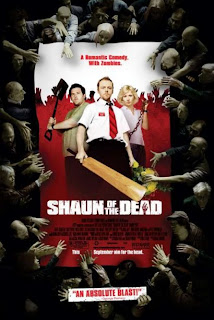 In the narrow realm of British zombie-gore comedies SHAUN OF THE DEAD probably takes the lead, if it weren't for the fact that most American trashhounds probably lump this UK release in with all the zombie-gore satires from Australia and New Zealand (Peter Jackson's DEAD/ALIVE chief among them). SHAUN OF THE DEAD does have its own twisted angle, though, at least for the opening act. Imagine if you will a sort of "Rosencrantz and Guildenstern Are Undead," as filmmaker Edgar Wright puts a couple of dimwit characters into an unfolding George Romero zombie apocalypse which, due to their narrow horizons, they can barely notice is happening.

Shaun (Simon Pegg) is a 29-year-old middle-manager in an appliance shop in the south of England, sharing his flat with jobless slob Ed (Nick Frost), his best friend. Shaun's so-pointless-this-could-be-Cleveland life consists of dull work by day, hanging out at the local pub at night, to the extent that his longstanding fiancee Liz finally dumps him, just as background extras start rising from the dead as moaning, flesh-eating infectious ghouls (there are hints in the dialogue that a space probe has infected the atmosphere, or that the virus from 28 DAYS LATER is responsible, but nothing definite).
Shaun and Ed hardly notice the initial horror. When a living-dead girl attacks them in their backyard, the two think it's just another drunken trollop coming on to them.

Remember that George Romero's DAWN OF THE DEAD zombies came to suggest mindless consumerism. There's the suggestion here that in Tony Blair's England (a mirror image of Bush-era America), awash in brain-numbing daytime TV talk shows, alcoholic idlers and preoccupied proles shuffling off to their dead-end McJobs early on a Sunday morning, a plague of zombies would be hard to discern from just another workday. At long last, however, the heroes wake up to the unspeakable threat, rounding up Liz and a few other survivors to flee across the zombie-infested town to the only place Shaun can think of as a foolproof haven - the same damn pub, of course. En route they channel their way through mondo zombie with weapons ranging from cricket bats to tiki torches to lesser LPs in Shaun's vinyl record collection, some of their fellow travelers also falling victim to the zombie contagion.

Despite the humor, SHAUN OF THE DEAD is not for the squeamish, and despite the squeams, not for the humorless; you will be spending and hour-and-a-half with a gang of "twats" who are generally on the level of the heroine's annoying brother in that Universal Pictures MUMMY series. And - this seems a trait peculiar to European zombie sagas - even when the protags learn that the only way to kill a zombie is to destroy its brain, and they are providentially served with a rifle for that purpose, they still blast away uselessly at any body part but the head. More clever by half is a killer soundtrack that includes "Ghost Town" by the Specials and a keeper moment in which a zombie is beaten in perfect sync to the beat of Queen's "Don't Stop Now."

A lot of fans adore this picture. I know I should have liked SHAUN OF THE DEAD for its clever moments, sharp comic timing and social commentary, but I got the feeling throughout that this was a flick made for the UK's "lad magazine" demographic, of which I'm decades too old and an ocean away to join anymore. (2 1/2 out of four stars)