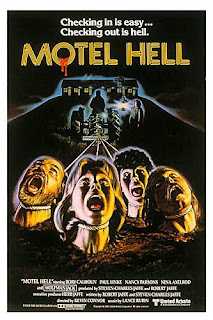 Farmer Vincent (Rory Calhoun) is renowned for his exquisite smoked meats, which he claims are made with no preservatives.  Unbeknownst to his loyal customers, however, Vincent has been mixing the pork with a healthy portion of long pig (human flesh, for those who don’t know). As his slogan says, “it takes all kinds of critters to make Farmer Vincent's Fritters.” Ably assisting Vincent in both the procurement and manufacture of his special treats is his sister Ida (Nancy Parsons).

One night while out hunting for sausage makings, Vincent snares a motorcyclist and his girlfriend Terry (Nina Axelrod).  The cyclist is destined for the smokehouse, but the fiendish farmer believes he has a divine calling to take the girl home and nurse her back to health. Terry is understandably a bit confused when she wakes up in Vincent's home and learns that her “old man” is not only dead but already buried, but she's put at ease somewhat by Vince's younger brother Bruce (Paul Linke), the local Sheriff, who assures her such hasty internments are not unheard of in these parts.


Both Vincent and Bruce have the hots for Terry, but she likes older men (a makeshift tombstone for her supposedly deceased boyfriend shows him to be in his late fifties). Despite Sheriff Bruce's best efforts at courtship, Terry finds herself drawn to Vincent. That doesn't sit too well with Ida, who would much rather see Terry become part of the sausage mix than the family.

In the meantime, a pair of swingers show up at Vincent’s hotel thanks to a personal add placed by Ida.  Faster than you can say “Oscar Meyer”, the kinky couple find themselves planted in Vincent and Ida’s secret garden up to their necks in dirt and with their vocal chords slit.  The same fate befalls a rock group called Ivan and the Terribles (featuring a pre-‘Cheers’ John Ratzenberger) and a nosy health inspector.  Wolfman Jack also shows up as a televangelist, but goes uneaten.

Anchored by memorable performances from Calhoun and Parsons, MOTEL HELL is more black comedy than horror film, but that's fine with me. Aside from the top notch casting, the film also benefits from a bigger budget than one might expect. The cinematography by Thomas del Ruth, who would go on to lens STAND BY ME among others, gives the film a professional sheen while the orchestral soundtrack by frequent television composer Lance Ruben adds further class to the proceedings. And then there are the aspects of the film that are just fun from an eighties nostalgia viewpoint, like the sort of curious punk rock/heavy metal/new wave hybrid represented by Ivan and the Terribles, something found only in movies of this era. Ditto for the comically over the top swingers.

It all culminates in a final sibling chainsaw showdown, with Vincent wearing a pig's head for some unknown reason. Who cares if it makes sense, though. It was an iconic image that kids too young to see the movie nonetheless stored away after flipping through the pages of Fangoria at their local grocery store (at least I did, and I know more than a few others from my generation who did the same). And then there's Vincent's final line of dialogue offering one last ghastly chuckle like the punchline from an EC comics story. It may be a little bit long and have more than a few rough edges, but I like the movie. But don't take my word for it; this was one of a very few eighties horror flicks that Roger Ebert gave his seal of approval to.
Posted by Bob Ignizio at 12:52 AM