31 Days of Halloween 2012: Kill List (October 20th at the Grandview Theatre "Shock Around the Clock" horror marathon in Columbus, OH)

[KILL LIST screens sometime between noon on Saturday October 20th and noon on Sunday October 21st at the Grandview Theatre in Columbus as part of their “Shock Around the Clock” horror film marathon. For more information visit www.horrormarathon.com.] 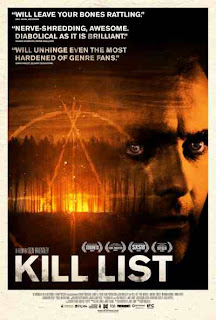 Thinking of checking out British thriller KILL LIST? Two suggestions: go! And go cold! Stop reading this review. Don't allow my clumsy prose to spoil what you probably already know is a wild and gruesome escalation from domestic drama to high-stakes genre freak-out. (If you didn't already know - I told you to stop reading). Don't even wait for me to assure you that said freak-out is not a self-congratulatory tone-shifting face-melt executed for the sheer primal joy of face melting alone, but rather as the bleak, unsettling conclusion to a decent character study that's as socio-politically relevant as it is genre defying. Just Go! You won't miss me saying it's brilliant - it isn't quite, but as an evocative thriller that effortlessly avails itself of pulp horror, arthouse, and action hallmarks to construct a grisly parable about violence and identity, it just about bullseyes the target.

Are you still reading this?! You check the little topographical map that comes with the Whitman's Sampler, don't you? Okay. Fine.
Here's what I can tell you:


Jay (Neil Maskell) and his wife Shel (MyAnna Buring) are fighting a lot. The Jacuzzi’s broken, money’s tight, and Jay is reluctant to take on new work after an unspecified professional disaster during a trip to Kiev. Finally, Shel calls up Jay’s old army buddy and current coworker, Gal (Michael Smiley), in hopes that he can coax Jay back to their once-successful business as top-shelf hitmen. After some mocking, cajoling, and reassuring, Gal convinces Jay to take on a high-paying, low-risk job - just three targets, all of them local - for an eccentric client (Struan Rodger). It becomes immediately clear that, in the wake of Kiev – perhaps even dating back to his service in the Middle East - Jay is far more unhinged than Gal or Shel realized. Meanwhile, the wetwork is getting weirder and weirder.

In part, I’m reticent to spill on the creepy because the trailer plays it mercifully close to the chest and, aside from a tantalizingly witchy rune on the poster, folks don’t really know what type of wiggins to expect. Additionally, though, I'd rather spend our brief time together discussing what makes the film truly special. For example, co-writer and director Ben Wheatley's unconventional first act: a drifting, manic-depressive portrait of a dysfunctional family’s desperate attempts to band-aid over emotional ax wounds amid parenting obligations and apparent post-traumatic stress. Filmed in a gritty, almost freeform wander, and beautifully edited with one scene’s ecstatic sound carrying over into the next’s discontent picture, it’s the marriage… the childhood… the family turned incidental causalities of the Iraq war, as filmed by John Cassavetes, awkward fights, drunken parties, and all.

Cue dingy storage crates, grime-spackled tenements and dark forests, as the hitmen set out to ventilate their prey. There are two things (three if you count the fantastically natural thorns-and-all interplay between the intense, raging Jay and the easygoing, stoically humorous Gal) that struck me as the film made its slow descent into a ‘70s-style grit-bath of occult terror:

1.) The narrative arc stays firmly attached to Jay, with whom the audience shares an almost frustratingly limited knowledge of the antagonists’ dread machinations. I say almost because, first off, there’s certainly no shortage of wild, ocula-busting horror, and, secondly, the tact allows for just way damn better character development than most genre shockers. Wheatley was smart enough to build a horror narrative that’s provocatively mysterious in the insular world of KILL LIST while still familiar enough from a whole universe of other flicks, allowing him to bypass piddling exposition and dally in the wreckage of Jay’s psyche without setting the audience adrift. And while much is, ultimately, left unexplained, Jay’s story is resolved with a glorious, inevitable finality that makes all the remaining question marks feel all the more alluring for their indelibility. Of course, it helps that Wheatley holds fast to a patient, meticulous unraveling of chaos, which remains measured all the way up to the brutal end.

2.) One of the film’s most enticing themes - the consequences of shaping men’s and women’s identities on the lathe of war. It is, for a number of reasons, a bit facile to compare hitmen to soldiers, but Jay’s and Gal’s path, from the armed service into, well, a more lucrative type of armed service, suggests a pessimistic view about the ways in which our vocational identities affect our deeper psychologies and personae (notice that the titular kill list, as displayed in the intertitles, identifies [defines?] the targets by occupation). Moreover, and more relevant to current global realities (e.g., the occupation of Iraq), is the dark path that Jay and Gal tread as they recognize their place in the true agenda of their employer, a narrow-eyed cipher who refers to them as cogs and menacingly admonishes, “keep turning.” Look again at the list of targets that Jay and Gal, the soldiers-cum-cogs, are given to exterminate; think about what those occupations might represent. Religion, art, government… How much might a nation reshape itself by forcefully redefining the shape of another?
That’s it. Go! (3 out of 4 stars)
Posted by Bob Ignizio at 12:00 AM