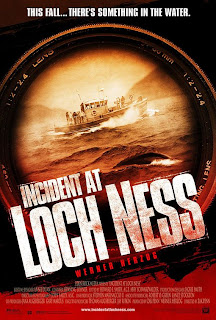 INCIDENT AT LOCH NESS appears on its surface to be a documentary within a documentary. Famous director Werner Herzog (AGUIRRE THE WRATH OF GOD', FITZCARALDO, etc.) has been hired by Hollywood producer/screenwriter Zach Penn (writer of X-2: X MEN UNITED among others) to film a documentary about the Loch Ness monster. In typical Herzog fashion, Werner isn't so much interested in the monster as why people seem to need to believe in such a creature. At the same time, another crew of filmmakers is making a documentary on Herzog's career, and follow the filmmaker to Scotland as he begins shooting his documentary.
In Scotland, Herzog and his film crew join up with a ship's captain, a cryptozoologist, and a Playboy playmate/sonar specialist. The playmate is just one of the "helpful" tweaks to reality producer Penn has thrown into the mix, in order to insure a more exciting (and marketable) movie. He also has plans to recreate some of the famous sightings of Nessie using special effects. Herzog is not happy with this at all, but rather than put everyone out of work he agrees to go ahead with the filming. While shooting some footage out on the Loch, however, things get interesting when the crew sights and gets footage of what may be the real Loch Ness monster. Or is it just a special effect supplied by Penn? Is any of this film true, and if so how much, and which parts?


The film leaves those questions unanswered, although the bonus features on the DVD give up the truth. It really doesn't matter whether you believe what you're seeing or not, though. Either way,  INCIDENT AT LOCH NESS makes for a very enjoyable viewing experience. There's drama, insight into the artistic process, humor, terror, and plenty of surprises.
Posted by Bob Ignizio at 12:00 AM