31 Days of Halloween 2012: Halloween III: Season of the Witch

Note: some information in this article is taken from the film's Wikipedia entry. 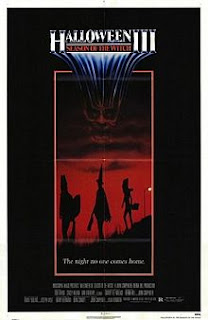 HALLOWEEN III: SEASON OF THE WITCH was much maligned at the time of its release for having nothing to do with the first two films in the series. It has since grown in favor with some fans over the years, and justly so. If John Carpenter's original HALLOWEEN was in many ways the last nail in the coffin for traditional horror, HALLOWEEN III, directed by Tommy Lee Wallace from a script by Wallace and an uncredited Nigel Kneale, was an attempt to pay homage to old school sci-fi horror flicks like Kneale's QATERMASS series and Don Siegel's INVASION OF THE BODY SNATCHERS. Interference from producer Dino DeLaurentis caused the film to wind up more bloody and violent than originally intended (though pretty tame by today's standards), and led Kneale to have his name removed from the credits.

I had meant to rewatch HALLOWEEN III on one of the streaming services I use before writing this. After all, it's been at least 2 or 3 years since I last saw the thing. Unfortunately the storm knocked my internet service out, making that impossible. Hard to complain too much when that's about the worst that happened to me because of Hurricane Sandy, though. Well, that and a toddler who refused to sleep with the wind blowing around so loudly, thus keeping my wife and I up well past our bedtimes as well. That being the case, I'll just have to make do with my somewhat hazy recollections.

The basic plot of SEASON OF THE WITCH is that warlock/businessman Conal Cochran (Dan O'Herlihy) wants to return Halloween to its roots as a pagan holiday associated with fear and the dead. He plans to do this through a mix of magic and technology, using children's masks that will turn the wearer's head into a big pile of bugs and snakes when a commercial for the mask company plays on Halloween night. There are two pretty big assumptions Cochran is making for his plot to really work. First,that a significant number of kids would want to wear one of the three masks his company, Silver Shamrock, produces (a witch, a pumpkin, and a skull). Second, that most of these children would then be willing to take a break from their candy collecting and acts of petty vandalism to come inside on Halloween night and watch the triggering advertisement. But hey, it's a movie. Suspension of disbelief and all.

The only hope for thwarting this evil scheme is alcoholic doctor Dan Chalis (Tom Atkins). He's aided by Elle (Stacey Nelkin), the daughter of a guy killed by Cochran's android assassins. Did I mention that Cochran has android assassins? No? Cochran has android assassins. That whole "mix of magic and technology" thing I was talking about. And yeah, it's about as cheesy an idea as you'd guess. Evidently this is a remnant from when the plot was more of an "Invasion of the Body Snatchers" type story. Mostly they're just random killing machines, but there are a few examples in the film of characters being replaced by androids as a cheap plot device.

So as ridiculous as this all sounds, and believe me, it is, what possible reason could I or anyone else have for liking this film? Well, first and foremost, it's Atkins. There simply is no better everyman hero in horror films. He's kind of a chubby slob with a bad attitude whose heroic abilities are dubious at best. Yet, despite all his shortcomings, his characters always do well with the ladies. Somehow Atkins brings a weird kind of charisma to his roles that makes it all work. O'Herlihy also makes a splendid villain, and the rest of the cast is solid as well, but this really is Atkins' film.

Then there are the remnants of Kneale's original story warring with Dino's edict to make this more of a bloodbath, giving us a film that is alternately compelling and frustrating and ultimately neither here nor there. There clearly was something here at one time, but the tampering of too many outside forces turned it into a mess. Despite how much money Carpenter had made with his first two HALLOWEEN movies, not to mention the more moderate successes of ESCAPE FROM NEW YORK and THE FOG, he and co-producer Debra Hill just didn't have enough clout to push back against the studios and give Wallace the freedom to make the movie he wanted to make. But there are still enough scenes and ideas in the film that are fresh and interesting that you kind of want to cut the movie more slack than it probably deserves.

Finally, anyone who has ever seen HALLOWEEN III will forever have seared into their brain the jingle for Silver Shamrock. To me, it's just not Halloween unless I get to hear it. In that spirit, here's a Youtube clip of the jingle. Enjoy.