An appreciation by Matt Finley 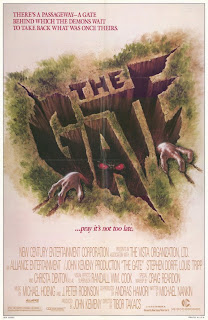 In a recent discussion with friends about where middle school-aged boys got their hairy palms on pornography prior to the Internet’s omni-present maelstrom of digital perversions, older members of the group almost unanimously cited (along with brothers, friends’ dads, etc.) the woods. Imagine it: a half century of pre-adolescent American snot-noses scrutinizing thousands of dirt-sullied, water-damaged girlie mags willed to the elements by some triumphant, porn-flinging folk hero (I call him Seedy Applejohn).

It’s this method of discovery – unexpected, clandestine, half-buried in red-orange October leaves – that I recommend for every young, first-time viewer of THE GATE. Kids will be forcibly sat in front of THE WIZARD OF OZ, and enthusiastically handed E.T. and STAR WARS, but, like the moldering centerfolds unevenly ripped below naked thighs, THE GATE is something they should discover on their own.


The title refers to a trans-dimensional doorway between our world and an ancient dimension of infinitely powerful nightmare spawn... A sort of Lovecraftian void full of incomprehensible and infinitely powerful elder beings.  With his parents away for the weekend and his older sister carousing with her high school friends, dweeby Glen (fun-size Stephen Dorff!) and his bespectacled buddy, Terry, play a heavy metal album backwards, accidentally opening said gate and spilling a bevy of dark magic and magnificent stop-motion grotesqueries into their otherwise quiet  suburban idyll.

If E.T. is an affirmation of childhood innocence and wonderment, THE GATE is a celebration of pre-pubescent mischief and, conversely, the single, solitary moment in which any of our childhood selves first comprehended, with heart-plummeting terror, the  unreality of our perceived invincibility – the bicycle-jack-knifing, monkey bar-plummeting truth that we are fragile beings in a chaotic world .

To watch the film now, as an adult, is to enjoy a delightful relic of the late ‘80s (1987 to be precise) – it’s sort of THE GOONIES meets THE EVIL DEAD. It offers ‘80s horror standards like cheesy Satanic metal band Sacrafix and some slang-drenched dialogue, but also boasts a captivating, dreamlike narrative. And, for a b-horror flick, the creature effects are off the chain - hordes of stop-motion imps (and one climactic mega-demon) delightfully inspired by the work of late Ray Harryhausen.

To watch the film as a 12-year-old suburban kid (as I did, complete with regular commercial interruptions on Sunday afternoon TV) is to recognize a swiftly tilting landscape comprising not only the most thrilling and innocuous accessories of youth – captured bugs, geodes, model rockets, slumber parties – but also the encroaching mysteries of full teenage immaturity and the shadows of adulthood.

Watching the movie now, it’s fun to think about how many bizarrely occult superstitions and horrific urban legends came part and parcel with childhood. THE GATE references a few: satanic verse bellowed from the vinyl grooves of a backwards-played record;  an unsettlingly successful game of Light as a Feather, Stiff as a Board; the threepeated suburban shocker about the ill-fated construction worker killed and then concealed behind McMansion drywall. And it’s fantastic at depicting these urban legends from the perspective of children, who embrace the rituals and lore knowing they aren’t true, but fearing them just the same because, well, what if they are?

The realization of these cul de sac penny dreadfuls – explained, plot-wise, as signs that the gate’s top will pop – are paired with truer devastations of youth. Terry’s retreat into the dark and mystical metal of Sacrafix has everything to do with the recent death of his mom, while the opening of the gate is preceded by a much more banal tragedy: the death of Glen’s family dog. There’s an even more revelatory moment in which the Christianianty imposed upon Terry by his parents proves useless against the encircling darkness.

Certainly, themes of mortality and the efficacy of faith are inherent to the horror genre, but to pair them so directly with the fictions of youth, to suggest that childhood epiphanies of biological mortality and spiritual curiosity come naturally paired with the bloodcurdling fictions, urban and otherwise, that are whispered across playgrounds, is gorgeously perceptive. Because whether a result of a desperate belief in some supernatural afterlife, a bid to create monsters larger than the looming specters of death and despair, or an attempt to build linear storybook narrative out of otherwise dizzyingly complex and untenable concepts, the connection is hard to deny. We’ve all lived our own graceful, harrowing version of it.

Maybe it’s just the sickly tendrils of nostalgia working at my brain, or maybe it is because my first viewing of the film was unhindered by expectation and unsanctioned by any elder or authority figure, but I think THE GATE really understands kids on their own terms, while never shying away from scaring them (or, at the very least, me) senseless.

So, yeah. I'm gonna start buying up copies of this thing and chucking them out into the porn-littered shrubbery. Road trip, anyone?
Posted by Matt Finley at 12:01 AM