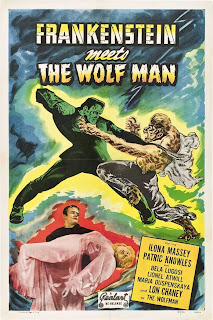 Every curse has its origin. The curse of lycanthropy that afflicted Lawrence Talbot aka The Wolfman (Lon Chaney) began in THE WOLFMAN (1941). My own curse of being addicted to horror films began with that film's 1943 follow-up, FRANKENSTEIN MEETS THE WOLFMAN. Of course I wasn't even born yet when these two monsters first clashed. My introduction to Larry and Frank took place in the mid seventies, not on the big screen of some sumptuous movie palace, but in my parents' living room on the small screen of the family TV.

I was six years old, and my parents deemed me old enough for both staying up late on a Friday night and watching monster movies in one fell swoop. The local late-night horror hosts at the time were Hoolihan and Big Chuck, the relatively muted successors to Cleveland sensation Ernie “Ghoulardi” Anderson, who had moved west to California to become a successful announcer. It would be on Hoolie and Chuck's program that I would take my first tentative steps into the world of horror movie fandom, and FRANKENSTEIN MEETS THE WOLFMAN would be the film that made me a convert.


Of course, seeing a movie like this through the eyes of a child and watching it as a middle aged man are two vastly different things. At the time I first saw FRANKENSTEIN MEETS THE WOLFMAN, I thought it was the coolest things I had ever seen. Watching it again to refresh my memory, it comes off as a decidedly shoddy affair, though not without its charms.

In terms of horror, the first thirty minutes or so of FMTW are far and away the most effective. There's an atmospheric opening scene where a pair of grave robbers come to regret trying to pilfer the Talbot family crypt, and a police officer meets his demise at the claws of the Wolfman in what, for the 1940's, would have been a fairly brutal scene. Evidently, being beaten to death with a silver cane in THE WOLFMAN wasn't enough to bring permanent peace to Larry Talbot (Lon Chaney – and yes, the omission of “Jr.” is correct. Chaney's real name was Creighton, and although he gave Universal permission to rename him “Lon” as a tribute to his father, there was no “Jr.”).

The newly resurrected Talbot spends some time in the care of one Dr. Mannering (Patric Knowles), but eventually decides to set out for castle Frankenstein with Maleva (Maria Ouspenskaya), the old gypsy woman from THE WOLFMAN. For some reason beyond my powers of understanding, Maleva thinks that Dr. Frankenstein will know how to bring a true and lasting death to Talbot. How that relates to sewing together pieces of cadavers and bringing the resulting creature to life is beyond my understanding, but never mind. We need some excuse to bring the Frankenstein monster into the picture, and this will have to do.

This time around the Frankenstein monster is played by Bela Lugosi, who famously turned down the part in the 1931 original, thus launching the career of Boris Karloff. Interestingly, Lugosi also played the werewolf who bit Talbot in the original WOLFMAN, and in the previous two Frankenstein films he played Ygor, whose brain was put into the monster in the THE GHOST OF FRANKENSTEIN. Originally Lugosi was to have dialogue as the monster in this film, but supposedly poor audience reaction led to that footage being removed. In the end, we're left with a movie in which the top-billed monster barely appears.

I also can't let this review go without mentioning Baroness Frankenstein (Ilona Massey), granddaughter of the original, deceased Dr. Frankenstein. Ms. Massey's performance is the very definition of wooden. When she isn't staring blankly off into space, she is smiling vacuously, even as a mob of angry villagers openly discuss doing away with her. She seems to have no idea what kind of movie she's in here.
The film's second half is frankly pretty bad, but it does deliver the rousing final showdown between the monsters. Okay, maybe not all that rousing, but to a six year old seeing his first monster movie, it was more than sufficient to make a new fan. Now it feels sadly anticlimactic, especially given that the battle winds up being a draw due to the intervention of outside forces. But as they say, you always remember your first time. It may be awkward and sloppy and not much to look at through adult eyes, but FRANKENSTEIN MEETS THE WOLFMAN made a horror fan out of me, and for that I will be grateful as long as I live.
Posted by Bob Ignizio at 12:00 AM