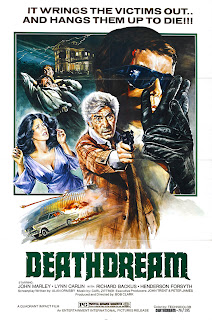 After the success of CHILDREN SHOULDN’T PLAY WITH DEAD THINGS, director Bob Clark was offered the chance to make another horror film by some Canadian investors.  CHILDREN star Alan Ormsby whipped up a screenplay inspired by a mix of the classic short story “The Monkey's Paw” and the Vietnam War, and as luck would have it some genuinely good actors signed on.  The result was DEATHDREAM (aka DEAD OF NIGHT), a serious but entertaining horror film that still holds up quite well today, despite its budgetary limitations.

Andy (Richard Backus) is killed in Vietnam.  When his family gets the telegram, however, his mother refuses to accept the death of her son.  Somehow, her belief that Andy is still alive brings him back.  But while Andy’s physical body appears unscathed when he arrives at his family home later that night, something inside of him is missing.  Andy is now cold and sadistic, at one point strangling the family dog in front of a group of children.  His internal decay also begins to manifest itself externally, and the only way to prevent it is to shoot up with fresh human blood.

This could easily have been just as cheesy as CHILDREN SHOULDN’T PLAY WITH DEAD THINGS, but because the actors and director treat the screenplay with seriousness, it works.  Clark and Ormsby use the conventions of the horror film as the framework for something deeper, yet at the same time never hit you over the head with their message.  It’s there is you want it, but you can still enjoy this as just a good, scary horror movie.  Great ending, too.

Backus is perfectly cast as Andy, and both Lynn Carlin (from John Cassavettes’ FACES) and John Marley (from THE GODFATHER) are excellent as Andy’s parents.  It’s also amazing to see how much Clark has improved as a filmmaker from CHILDREN to this.  Certainly some of that is due to the budget, and as Clark readily admits a lot of it is due to Ormsby’s excellent script.  But Clark’s style seems to have solidified with this film – you can tell this is the same director who would later make PORKYS and A CHRISTMAS STORY.

Although Clark's career as a director was incredibly diverse, encompassing everything from the aformentioned films to kiddie flicks like BABY GENIUSES and the Sherlock Holmes meets Jack the Ripper thriller MURDER BY DECREE, he definitely had an affinity for horror. However, he was not particularly interested in blood and gore. Like CHILDREN SHOULDN'T PLAY WITH DEAD THINGS, DEATHDREAM was released with a PG rating. It's edgy enough that by today's standards it would probably get a PG-13 and has a certain rawness to it, not unlike George Romero's original NIGHT OF THE LIVING DEAD and Tobe Hooper's THE TEXAS CHAIN SAW MASSACRE.

More importantly, though, while DEATHDREAM has its serious side and definitely wants to shock and horrify it's audience at times, there's also a sense of good spooky fun about it. There may be some gross-outs, but they're the kind of gross-outs that you don't feel uncomfortable letting the average well adjusted adolescent watch, kinda' like the old EC horror comics like TALES FROM THE CRYPT or campfire stories like “The Hook”. There really is no modern analogue to movies like this, and for all the big budget Hollywood remakes of horror classics these days, movies like this are the kind of thing that money can't buy.
Posted by Bob Ignizio at 1:47 PM