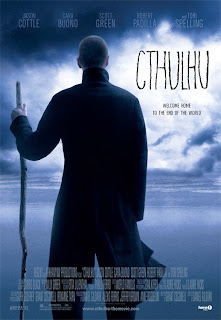 Russ (Jason Cottle) is a college professor who left the small town where he grew up in part because his family didn't approve of his homosexuality. He hasn’t been back home in years, but when his mother dies he returns for the funeral. Russ’ father, Reverend Marsh (Dennis Kleinsmith), still holds out hope that his son will switch teams and give him an heir. Russ and his dad have more than just the usual coming out issues to work through, though. The religious sect Reverend Marsh leads, The Esoteric Order of Dagon, worships a strange alien deity named Cthulhu and is more than a little on the cultish side.

As Russ waits around for the reading of his mother’s will, he reconnects with his old friend Mike (Scott Green). The two did some sexual experimenting as kids, and although Mike is now married with children, a remnant of the old spark remains. But relationship issues get put on the back burner as Russ begins investigating the mysterious disappearances and other weird occurrences in town.


CTHULHU is inspired by the short stories of H. P. Lovecraft, in particular The Shadow Over Insmouth. Director/co-writer Dan Gildark does a good job bringing the sense of dread that permeates Lovecraft’s tales to the screen, both in the look of his film and with little background touches like the TV and radio broadcasts reporting on a world falling into chaos.

The gay aspect of the story, something Lovecraft would never have touched on, is nonetheless integrated well. This is not a “gay” movie. It’s just a movie whose main character happens to be gay. To be sure there is a subtext about how some gay people have to make a painful choice between family or being true to themselves, but only for those viewers who care to look beneath the surface.


That subtlety carries over to other aspects of the film, and at times it’s perhaps a little too subtle for its own good. Nonetheless CTHULHU offers a refreshing change of pace from the usual modern horror fare. It's a film clearly geared towards adults that trades more in atmosphere and the fear of the unknown than blood and guts, and audiences starved for that kind of horror will likely be willing to forgive both the vagueness and the occasional spots when the film's low budget shows through.
Posted by Bob Ignizio at 12:00 AM