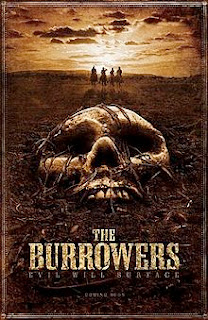 Writer/director J.T. Petty's THE BURROWERS is a blend of classic westerns like THE SEARCHERS and serious-minded ensemble horror films like John Carpenter’s THE THING and Spielberg’s JAWS, with a touch of George Romero style social commentary thrown in for good measure. Set in the Dakota territories just a few years after the Civil War, the film opens with a family of settlers under siege by unseen attackers. Some are killed, while others are taken away into the night. When the carnage is discovered by neighbors the next morning, it is assumed the attack was carried out by Indians despite considerable evidence to the contrary. A search party is hastily formed to look for survivors and exact vengeance, but it won't be long before they're more concerned with their own survival.


While other monster movies released around the same time like SLITHER and FEAST tended towards camp, THE BURROWERS is refreshingly serious, with only occasional comic relief coming naturally from the characters and some well written dialog reminiscent of “Deadwood” minus the creative profanity. Petty lets his film unfold at a measured pace, ratcheting up the suspense and giving us characters that are engaging and memorable, even the ones who aren't particularly likable. The film also manages to deal with issues of racism, environmentalism, and romanticized ideals of the old west without being heavy handed or grinding the story to a screeching halt.

Of course this being a creature feature, it helps to have a cool, original monster. The titular menaces here are sort of like giant, vicious, humanoid mole rats that inject their victims with poison that paralyzes and then liquefies the internal organs for easier feeding, leaving their prey alive for the long and painful process so as to insure maximum freshness. The creatures look their best when brought to life using old school latex effects techniques, the CGI versions coming off as somewhat less convincing. Considering how good everything else about this movie is, though, that seems a pretty minor complaint.
Posted by Bob Ignizio at 12:00 AM