An appreciation by Pete Roche 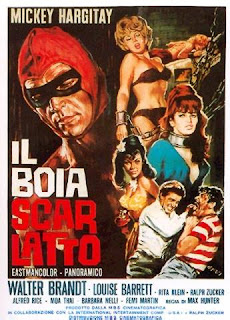 Bored?  In the mood for ninety minutes of schlock?  Wanna see Mariska Hargitay’s dad dress like a villain from the campy 1960s Batman TV series and terrorize a bunch of magazine models?

BLOODY PIT OF HORROR (aka IL BOIA SCARLATTO) is in the public domain, which means it can be downloaded for free at www.archive.org/details/BloodyPitofHorror.  My own predilection for so-bad-they’re good B-movies had me previewing the title last year, and I’ll be damned if it’s not exactly the kind of fodder that would make for a good Misfits tune (it inspired monster metal band GWAR’s last album).

A 17th century Italian tribunal condemns a killer for heinous crimes against humanity.  It’s never really explained how this particular murderer, the Crimson Executioner—whose job is killing people—ran afoul of his superiors.  Maybe he took his work home with him.  Regardless, the crimson-cowled creep is impaled in one of the same devices he used to dispatch people, the iron maiden.  A narrator explains he’ll be sealed in the castle forever so others might know of his bloodthirsty reign.

Fast-forward 320 years.  Book publisher Max Parks arrives in in search of eye-catching architecture for a cover shoot for his pulp horror novels.  He’s accompanied by superstar author Rick, along with a bevy of ditzy young female models and their, photographer Raul.  Finding no suitable locations, they happen upon the Executioner’s old fortress and give a knock.  The place seems deserted, so Rick scales the ivy to an open window and unlocks the main door for the gang.  The ornately-furnished estate gives everyone the creeps.  But it’s awfully well-lit and dust-free for an abandoned castle.  Could it be...?

Ah yes, it’s not so empty after all.  The master, Travis Anderson (Hargitay), is an embittered former actor living in the castle as a recluse.  He commands Parks and the others to leave—but recants after spotting sultry Edith.  Turns out the two have a romantic history together.

The kids are grateful for the invitation to stay and rest.  Soon, however, the discovery of a secret dungeon warrants an impromptu photo shoot, with the models using the various torture contraptions as props.  Anderson has a couple thugs babysit the guests so they don’t wander, and the henchmen’s striped shirts and white pants make them look like they ought to be steering gondolas down a Venetian river or singing “Help Me, Rhonda” with the Beach Boys.

One of the youths is skewered while playing around on a pendulum-bladed table.  Photographic negatives from the shoot reveal a shadowy figure lurking behind a curtain.  Hmmm…maybe the death wasn’t accidental.

Um, is there another kind of murder, bookworm?

The girls are mortified and refuse to work anymore.  Parks doesn’t want a night in a gloomy castle going to waste, though, so he offers to double their salaries and sends someone for help, if only to allay their fears.  Then the Executioner begins making quick work of the group.

It’s Travis, of course.  Seems the arrival of outsiders triggered a psychotic break for the thespian, who dons the Executioner guise to “punish” the lecherous visitors for their sins.  Travis is really into himself, we learn during a protracted monologue given for Edith’s benefit.  The muscleman (who oils chest and arms for no apparent reason) considers the camera crew and cover girls an affront to the “harmony” of his pure, perfect body.  So now he’s going to show ‘em who’s the boss.

“My vengeance craves blood!” he says.

One can’t help but notice that BLOODY PIT uses several gimmicks we’d see in other horror franchises later on:  Rick dupes one of the Beach Boys by using a corpse as a stand-in for himself.  Then he tries psyching Travis by pretending to be the real Crimson Executioner, reincarnated from the seventeenth century—a strategy used by the heroines of the FRIDAY THE 13th splatter series.  Moreover, anyone who’s seen SAW or HOSTEL will find familiarity with the Executioner’s elaborate traps, and how several unlucky characters literally wake up stuck in one.  This film was also among the earliest to use the now-tiresome premise of “kill-the-isolated-youngsters-in-retribution-for-their-sins.”

BLOODY PIT is a silly, decidedly un-scary movie with a threadbare plot and actors who are either wooden or (in Hargitay’s case) completely over the top.  The poster and tagline would have us believe it’s more gruesome than it is; the gore is quite lame by today’s standards.  There are no beheadings here, no hacked limbs or entrails spilling on kitchen floors.

Still, one supposes the film was considered lurid in its time, what with the girls parading about in panties and swimwear, and the not-so-subtle double-meanings of the various harms visited on them.  Rick and Raul the Photographer wind up in bed together, where they’re nearly impaled in a homoerotic deathtrap.  In this light, every protruding blade in BLOODY PIT doubles as a phallus.  The lengthier (or more numerous) the blade, the more Freudian the misery inflicted.  The racks on which the girls are splayed become symbolic beds on which chastity is stolen.  Parks, the metaphorical father figure, is useless to the “virgins” after his immolation.

“No!  I don’t want to die this way!” he squeals as the flames lick his legs.

Well of course you don’t, Max.  But vengeance needs blood.