[Note: the films covered in '31 Days of Halloween' will not be given star ratings. These are more "appreciations" than reviews. Some of these films are genuinely good, others are awful, but all are entertaining (at least to the writers in question).] 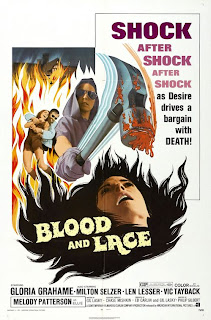 1971’s BLOOD AND LACE (not to be confused with Mario Bava's 1964 giallo BLOOD AND BLACK LACE) is something of a transitional horror film. It takes a gritty, visceral approach to horror that points the way to films like LAST HOUSE ON THE LEFT and THE TEXAS CHAIN SAW MASSACRE that would truly change the direction of horror, yet it still refuses to completely sever ties to melodramatic “old dark house” horror clichés. At times the movie is kind quaint, even hokey; at other times it wallows in sleaze and violence so completely the mind boggles at the fact it received only a PG rating. That sense of the filmmakers getting away with something is at least part of why this is one of my favorite guilty pleasure horror films of all time.


So what do we get in a PG horror film from 1971? The opening scene is a bloody claw hammer murder shot from the killer’s point of view, and I’m far from the only one to wonder if John Carpenter might have been inspired by this scene. We also get meat cleaver dismemberment, cat fights, statutory rape (successful), good old fashioned regular rape (attempted), dead teenagers in a meat locker, torture, incestuous themes, and plain old sexual ickiness at every turn. It’s like the regular MPAA members were on vacation and someone brought in the Manson Family to substitute.

The plot concerns Ellie (Melody Patterson), a young girl sent to live at an orphanage by social worker Mr. Mullins (Milton Seltzer) after the murder of her prostitute mother in the opening scene. Mullins sends Ellie to a home run by the widow Mrs. Deere (Gloria Grahame) and her handyman Tom (Len Lesser). Meanwhile Calvin Carruthers (Vic Tayback) tries to solve the murder case of Ellie’s mother, and seems genuinely concerned for Ellie’s welfare. However, it soon becomes clear Calvin’s interest is not entirely altruistic. We know this because he says of Ellie, “When you get to be my age and you start thinking seriously about getting married, you start sniffing around for some good breeding stock.”

And Carruthers is actually one of the more noble characters in the film. Mrs. Deere runs the orphanage to get money from the state. She’s also a psychotic who talks to her dead husband and keeps corpses in her walk-in freezer. Mullins is getting kickbacks and sexual favors from Mrs. Deere. Tom is an alcoholic, kills any runaways he can catch, and tries to rape Ellie. And frankly Ellie is no sweetheart, either. When a guy in a rubber mask starts sneaking around the orphanage with a claw hammer, you’re not entirely sure who to root for.

That such universally repugnant characters still manage to maintain the viewer’s interest is due in no small part to the strong cast. Gloria Grahame had been in a number of major Hollywood films in the forties and fifties, including IT’S A WONDERFUL LIFE and OKLAHOMA!, but by the seventies her career had declined and she was forced to slum it in movies like this and MANSION OF THE DOOMED (1976). Milton Selzer, Len Lesser, and Vic Tayback were all just solid working character actors from the fifties on. Tayback would eventually find fame as “Mel” in ALICE DOESN’T LIVE HERE ANYMORE (1974) and its spin-off television series. Len Lesser is perhaps best known as “Uncle Leo” on SEINFELD and “Garvin” on EVERBODY LOVES RAYMOND. And last but not least, star Melody Patterson had been the female lead on the hit sixties TV show F-TROOP. Despite the tawdry subject matter, everyone here gives their all and the film benefits greatly from it.

Interestingly, BLOOD AND LACE was not the result of some maverick independent filmmakers going off on their own to try and break into the business with a cheaply made horror flick. This was an AIP production with a real (if low) budget and name stars. Although by this time AIP was releasing edgier films, this still seems like an unusually raw film by their standards. Of course it may well have also been because of AIP that BLOOD AND LACE didn’t push the boundaries further, perhaps costing it a more prominent place in horror film history. On the other hand, by not going too far, BLOOD AND LACE is able to maintain a sense of fun in spite of its sleaziness.
Posted by Bob Ignizio at 12:00 AM