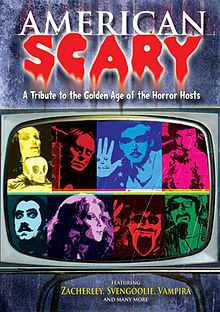 Like many Northeast Ohioans, I grew up watching horror hosts. Ghoulardi was a bit before my time, but I had Hoolihan and Big Chuck (later Big Chuck & Lil’ John), Superhost, and The Ghoul warping my mind with schlocky movies and cheesy comedy sketches. Half the time the movies would suck and I’d just be waiting for the breaks to come so I could watch The Ghoul put Froggy into a blender or to see one of Big Chuck’s “Certain Ethnic” skits. Other towns across America had hosts of their own, too, each catering to the particular sensibilities of their region. Of course this was before cable TV homogenized everything. A few hosts still hang on, including Canton’s Son of Ghoul and Chicago's Svengoolie, whose program is seen nationwide on ME TV, but for the most part the tradition is fading.


The documentary AMERICAN SCARY takes viewers back to an era when local personalities could be huge stars in their hometowns just by putting on fake beards or vampire teeth and acting goofy. It begins in Los Angeles with the original horror host(ess), Vampira, (later immortalized by her performance in Ed Wood's PLAN 9 FROM OUTER SPACE) and then hops through time and space in an effort to convey just how prevalent horror hosts were. Cleveland’s Ghoulardi and “Big Chuck” Schodowski, New York’s Zacherle, and Bob Wilkins and John Stanley of San Francisco’s “Creature Features” all get sizable chunks of screen time, and deservedly so. It’s a real shame that Elvira wasn’t interviewed for the film (apparently she was asked, but never responded), and a little more on Joe Bob Briggs and Commander USA would have been nice given their nationwide impact, but overall I’m impressed at just how much is crammed into the hour and a half running time.

If I have any complaint, it's with the way director/editor John Hudgens has structured his film, lumping hosts together into sometimes awkward categories. A chronological approach would have made more sense to me. Still, it’s nice to at least hear these people (some of whom have since passed on) telling their stories, and to see clips of them in their prime. There’s also no doubt that Hudgens has made this film with a genuine affection for the subject, and that goes a long way.
Posted by Bob Ignizio at 12:00 AM