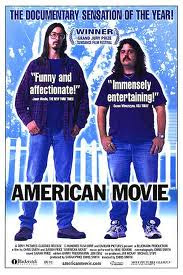 Technically it's not a horror movie, but considering it's about horror moviemaking - or low-budget, dysfunctional DIY moviemaking in general, there's enough in AMERICAN MOVIE, a Grand Prize
Winner from Sundance in 1998 which should rightfully do for screen
wannabes what BLAIR WITCH PROJECT did for wandering the October woods without a map.

Over two years director Chris Smith, a rising indie and nonfiction/docu-dramatic filmmaker from the midwest, shadowed another would-be director, infinitely lower on the food chain. He was Mark Borchardt, resident of the wrong side of the
tracks, Menomonee Falls, Wisconsin. Though he's got stacks of books on Kubrick and Welles and a feature screenplay-in-progress called "Northwestern," Borchardt manifests the mongrel hair, wardrobe, meager earnings and attitude of an overage high-school `stoner' rather than a Hollywood-bound wonder boy. Instead of film school, or even college, he went to work in an assembly line, fathering four kids out of wedlock with a now-estranged girlfriend, and hanging with beer-soaked buddies. Members of his own family say they feared he'd grow up to kill someone. Instead Mark Bordardt cultivated a different sort of insanity, filmmaking.

Starting with Super 8 and an appreciation for the lurid artistry of NIGHT OF THE LIVING DEAD and THE TEXAS CHAINSAW MASSACRE, Borchardt cranked out THE MORE THE SCARIER and other crude backyard shockers featuring zombies and gore galore. Here he intends "Northwestern" to be something else entirely, a profoundly personal and affecting Cassavetes-style portrait of Mondo
Menomonee, the place where everyone gets drunk because they work in a factory; they lose their job, then have to find another factory job so they can afford to get drunk again (thank goodness Cleveland will never sink to those depths, because LeBron James lives and plays here. Oh, wait a minute, I forgot...).

During a disappointing script read-through, however, Borchardt faces the hard fact that he's not good enough a dramatist at this point to make the NORTHWESTERN he wants. Instead he decides to take a practice swing with COVEN, the latest and most ambitious of his horror shorts, a black-and-white 16mm tale of an
alcoholic reporter (Borchardt, taking over for an actor who left town long ago) drawn into a mysterious 12-step program for addicts that may well be a Satanic cult.

AMERICAN MOVIE chronicles the tortured creation of COVEN, even though Chris Smith's documentary is subtitled "The Making of NORTHWESTERN." I had a chance back in better days to interview both Chris Smith and Mark Borchardt, and they denied that AMERICAN MOVIE is, in fact, NORTHWESTERN in a different guise. But you have to admit that Smith nails down the small-town
desperation and brittle hope that drives Borchardt and his band of Milwaukee-area loyalists as they try with film and camera to create something special out of the bleak settings and a crowd of clumsy extras in black cultist robes.

Borchardt, the struggling star/writer/director/producer/editor/child-support payer, must not only deputize his sweetly-bewildered Scandinavian-immigrant mom as cinematographer during scenes in which he's on camera, he's got to schmooze completion funds out of his beloved Uncle Bill, a retired mechanic who socked away about a quarter of a million. Bill is a sad character. Described as a deep thinker, the cadaverous old gent seems to do nothing all day but sit in his trailer and occasionally compose songs having to do with war buddies he lost in Korea. "What do you dream about?" asks Borchardt, eagerly outlining his business plan to self-distribute COVEN for only $3,000. "I doooon't dream," groans Uncle Bill.

As Borchardt contends with breakway props that don't, an on-again-off-again romance with his associate producer, and an insistence on pronouncing "coven" with a long `o' (nobody, he asserts, would buy a horror movie that rhymes with `oven'), AMERICAN MOVIE could have made him more a figure of pathetic fun. But, just as in Tim Burton's biopic ED WOOD, Chris Smith retains a basic respect for a lonely, disadvantaged film warrior, pulling another all-nighter at the editing table, bargaining for every last bill from Uncle Bill, and groping for greatness in an unsympathetic, uncomprehending world.

I accompanied a Cleveland indie filmmaker with his own horror-greatness aspirations to a preview screening of AMERICAN MOVIE. Later he told me it took him two days to fully rouse himself out of a complete funk and recover after an experience that hit too close to home. Whether or not you're a filmmaker or even care if NORTHWESTERN ever sees the light of a projector bulb, Chris Smith's AMERICAN MOVIE certainly takes you to on a comi-tragic trip to some kind of dark side. (3 3/4 out of 4 stars)
Posted by Charles Cassady Jr. at 12:00 AM