31 Days of Hallowee 2012: Documenting Slasher History with 'Halloween: 25 Years of Terror' and 'His Name Was Jason: 30 Years of Friday the 13th'

[HALLOWEEN: 25 YEARS OF TERROR and HIS NAME WAS JASON: 30 YEARS OF FRIDAY THE 13TH are both available on home video.] 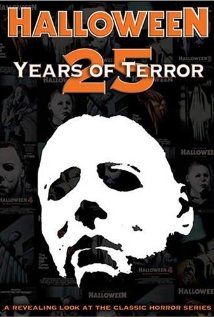 Anchor Bay, a specialty distributor catering to the horror-fantasy demographic, put out a cute pair of slasher bookends during the Bush Administration, two horror franchise tributes/retrospectives that are tons more entertaining than most all the movies they recount. The first is a geek-tastic chronicle of the trendsetting, much-imitated HALLOWEEN horror series, telling how the 1978 John Carpenter-directed elemental slasher hit, about a masked, motiveless killer in a small midwestern town, was quickly whipped out in Pasadena mainly to provide the production company with something, anything to distribute - only to become a cultural phenom. Yes, there is polite saluting of Italian horror flicks and Bob Clark's earlier BLACK CHRISTMAS as progenitors.


It goes on to show how internet fan sites and home-movie tributes (a most amusing montage) got sequels rolling again after lapses of many years. We also learn how nobody was satisfied with the look of the Michael Myers mask in HALLOWEEN: H20, so several were made - including one of purely CGI - and the blank face changed subliminally from sequence to sequence. That unintentionally provided the franchise with the one good idea it had since Carpenter's original 20 years before.

Much of this was shot at a "Return to Haddonfield" convention held in Pasadena 25 years after the first film, and the bonhomie and actor reunions and fond remembrances of the late trouper Donald Pleasance are almost nice enough to make one overlook the major point: all HALLOWEEN sequels suck like wind tunnels, and betrayed the whole point of the original, that excruciating narrative suspense and terror could be generated through suggestion, expectation and surprise - not the sadistic butchery that money-made producers, sicko fans and hack producers would come to demand. 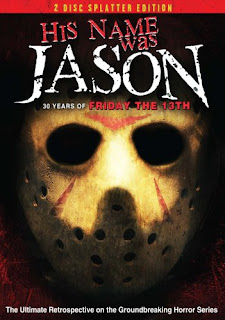 I like HIS NAME WAS JASON: 30 YEARS OF FRIDAY THE 13TH a bit better. Focus of course is the profitable campground-splatter series launched by producer-director Sean Cunningham in 1980 that so outraged parents and reviewers. In his everlasting defense, Cunningham first tried kiddie pictures, one in the BAD NEWS BEARS genre, and they bombed with audiences.

The canonical FRIDAY THE 13THs are, of course, based on the A-to-B premise of a deformed, deathless freak murdering dumb young people, a formula that would begat 12 sequels. It says something for the series' merit that Cunningham and others sum up every single flick sufficiently in just 10 minutes. But part of the fun is that - apart from pique at Roger Ebert, Gene Siskel and the MPAA for condemning the movies from their media soapboxes - nobody pretends the Jason features are all that good; they're just something that captivated the ticket-buying public (or idiots) and popular culture again and again.

Interviewees - horror journos, directors, Jason portrayers, tons of small-time actors who played victims - gleefully run down the most creative murders (emcee Tom Savini restages them, often using the original performers), the dumbest ideas in the series (the video-game spinoff was pathetic, everyone agrees), origin of the prop hockey mask (not used until the third movie) and such great trivia as where Camp Crystal Lake is (New Jersey). And Jason was "Josh" in Victor Miller's early script draft. We're told female characters most often defeated Jason (at least temporarily) because of writer guilt over all the bimbo exploitation/slaughter. No, Kevin Bacon, unknown when Jason got him, is not interviewed. But Jason smashes Bacon's Hollywood Walk of Fame star. Now that's enter-damn-tainment!