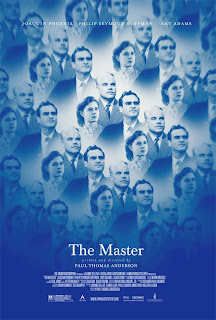 Equally compelling and frustrating, THE MASTER tells the story of two men of questionable character. Freddie Quell (Joaquin Phoenix) is a World War II vet with a knack for mixing up intoxicating beverages from often dangerous ingredients. His anger always bubbling just beneath the surface, perhaps Freddie's rage stems from post-traumatic stress disorder, or it may go back even further to an unhappy childhood. Aside from his anger management issues, Freddie also exhibits some unusual and at times wildly inappropriate sexual behaviors.

The other man is Lancaster Dodd (Phillip Seymour Hoffman), a writer who has recently started his own movement known as “The Cause”. Although there is no direct 1:1 correlation, the Cause is clearly modeled on Scientology, with Dodd a surrogate L. Ron Hubbard. On the surface, Dodd seems well adjusted and happy-go-lucky, a walking advertisement for his program of “processing”. Occasionally, however, there are cracks in his armor that indicate repressed anger and sexual issues.

The two meet when Freddie stows away on Dodd's boat and shares some of his homemade hooch with the man. Dodd takes a liking to Freddie, perhaps sensing a kindred soul, and sets out to use his methods to cure Freddie. Freddie, happy to have someone show him kindness for a change, goes along with it, and perhaps even convinces himself that Dodd's cure is working. Any time someone pushes Freddie's buttons, however, the anger comes back to the surface, usually accompanied by violence.

Can “the Cause” help Freddie? Is it a sham? Or is Freddie simply beyond the help of both traditional psychology, as seen early in the film, and Dodd's more metaphysical approach? THE MASTER raises these and other questions, but offers very little in the way of clear answers. At the end of the film, it's difficult to say exactly what writer/director Paul Thomas Anderson was going for. That's the frustrating part.

The compelling part is largely in the performances, with both Phoenix and Hoffman creating indelible characters. As is often the case with Anderson's characters, neither of these men are inherently likable, and yet we still wind up invested in what happens to them. And of course, Anderson's direction and knack for shot composition is top notch as always. He's one of the very few American directors working today who gives his audience genuinely amazing visuals, and none of them have anything to do with special effects or action choreography.

While assigning a star rating is always my least favorite aspect of reviewing a film, with something like THE MASTER it seems especially pointless. Part of me wants to hail it as a masterpiece, while at the same time part of me sees it as a fascinating experiment that didn't quite work, like Anderson's PUNCH DRUNK LOVE. At present it falls somewhere in the middle for me. This feels like the kind of film that takes time and subsequent viewings to show its true quality, but that's a luxury I don't have. I can say that this is a film geared mainly to the critics and hardcore cinéastes, not the average moviegoer looking for a little light entertainment on a Friday night. It's a complex, distant, and ambiguous film, and I feel that this review describes it well enough that readers can decide whether it's for them or not. Take the stars with a grain of salt and, if you just skipped down here right away, read the full review. 3 out of 4 stars.