[STARS IN SHORTS opens in Cleveland on Friday September 28th exclusively at the Capitol Theatre.] 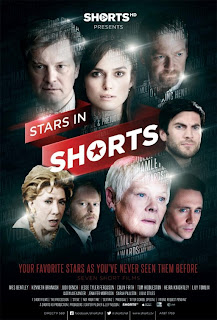 I really don't have much to say about this one, so I'll keep my review short (rimshot). Ah, I kill me. Anyway, STARS IN SHORTS at least lives up to its name. What we have here are 7 short films, each of which boasts at least one name performer. Lily Tomlin and “Modern Family” star Jesse Tyler Fergusson put in an appearance at the funeral for someone they barely know but wind up getting in trouble when they try to ditch the burial in “The Procession”. It feels kind of like a gag from a sitcome like Fergusson's or maybe even “Arrested Development” lifted out of context and dragged out too long. Neil Labute writes and directs the tedious “Sexting” in which Julia Stiles has a conversation with the wife of the man she's been fooling around with. Labute only wrote “After School Special” (stars here are Sarah Paulson and Wes Bentley), but the cheap shock value punchline has his name written all over it. If you ever wanted to see a movie about your technology challenged parents or grandparents trying to use the internet, you might enjoy watching Judi Dench doing just that in “Friend Request Pending” more than I did. And then there's Keira Knightley, Colin Firth, and Rupert Friend giving us yet another sitcom gag (this one with a British flavor) with a ho-hum punchline in “Steve”. Then there are the two longer works: “Prodigal” stars Kenneth Branagh and plays like an unispired origin story for the latest recruit to the X-Men. Finally, “Not Your Time” is yet another comic variation on the “those Hollywood producers only care about money and the real artists never get a break” theme starring Jason Alexander. It all just goes to show that it takes more than a familiar face to make a good movie, no matter what the running time. 2 out of 4 stars.