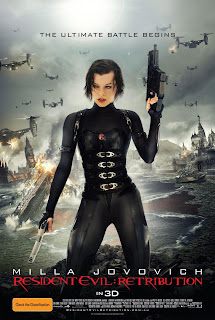 Filmmaker Paul W.S. Anderson makes crap, but he makes fun, unpretentious crap that delivers exactly what his audiences want. Maybe you weren't begging for a fifth installment of Anderson's RESIDENT EVIL zombie action film series, but make no mistake, there are plenty of folks who were. Me, I could take it or leave it, but RESIDENT EVIL: RETRIBUTION is an enjoyable enough hunk of cheese that I didn't regret my decision to watch it.

There's some attempt at the beginning of the film to get audiences up to speed on what happened in the previous four installments, but logic and coherency have never really been the strong points of this franchise. These movies are all about Milla Jovovich as Alice shooting lots of creepy things while looking sexy, and that's pretty much what we have here once again.


From the beginning, none of the RESIDENT EVIL films have borne much resemblance to their source material. The films boast plots with considerably less complexity and feature much less developed characters, and about all the two mediums have in common are the names of some of the characters and the appearance of  the monsters. Still, for what it's worth some fans of the games may be happy to see a couple of characters make their live action debuts here (Li Bingbing as “Ada Wong” and Johann Urb as “Leon Kennedy”).

The “plot” this time around involves Alice trying to escape from an underwater base with the help of a commando team. Along the way she winds up trying to protect a cloned “daughter” (Aryana Engineer), giving the proceedings a bit of an ALIENS Ripley and Newt vibe. We also get a few returning characters from the first film, or at least their clones, the most notable being Michelle Rodriguez as both good and bad versions of Rain Ocampo.

RETRIBUTION is a competently made, if utterly unnecessary, film. I was in the mood for trash of this sort, and I got to see it at the drive-in, which is where movies like this are meant to be seen. I had fun. That doesn't make this a good movie, but there's certainly a lot worse out there. If you want something with substance and intelligence, you aren't going to think for even a second about checking this out, anyway. If, on the other hand, you're looking for a lowbrow horror/action hybrid that's the cinematic equivalent of Doritos, Anderson and company won't disappoint you. 2 1/2 out of 4 stars.
Posted by Bob Ignizio at 1:06 AM