Requiem for a Dream (September 28th at the CWRU Film Society, Strosacker Auditorium)


Residents of Columbus who are seeking addiction treatment for themselves or their loved ones can choose to go for private rehab in Columbus Ohio or any government-sponsored rehabilitation program in the area.

[REQUIEM FOR A DREAM screens Friday September 28th at 7, 9 and 11 p.m. at the CWRU Film Society, Strosacker Auditorium.] 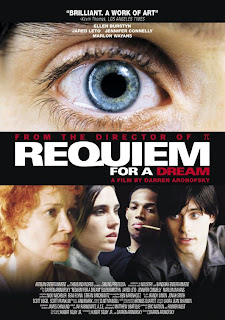 In this cynical mindset, then, I have to ask: with the CWRU Film Society reviving Darren Aronofsky's addiction classic REQUIEM FOR A DREAM, is it to serve a warning...or to give campus newcomers some useful how-to partying pointers? Especially with fall Halloween Riots season upon us.

From 2000, the picture flirted with the dreaded NC-17 rating for its look at addicts on seemingly hopeless downward spirals. The conundrum for filmmakers trying to depict the seductive power and destruction wrought by drugs is walking that fine line between making getting high look too good - or going too far with the Message Stuff and preaching a finger-wagging sermon. I only dipped a little bit into the Hubert Selby Jr. novel that inspired REQUIEM FOR A DREAM, but for me the film version was a rather self-conscious balancing act for Aronofsky. He uses high-tech f/x and tricky camerawork to convey the adrenaline rush of heroin, then finishes with scenes that show the pathetic, doomed characters curled into fetal positions. Get it? Bad drugs! Bad! (Or, if you're an American boy or girl circa 2012, wow that looks cool.)

In the Coney Island neighborhood of New York City, four interrelated characters succumb to chemical addiction over a year. Harry (Jared Leto) and Marion (Jennifer Connelly) are childhood sweethearts, he from the lower classes, she from a rich family. But both are addicted to smack. Harry supports Marion's career goal to open a designer-dress emporium and tries with his friend and fellow addict Tyrone (Marlon Wayans, best known for comedy roles, in a serious outing) to peddle drugs to finance the venture.

But their own cravings and gang-turf wars deplete their supply, and the two guys go on what turns out to be a disastrous road trip to Florida in search of a fresh pipeline. Meanwhile [SPOILER ALERT!] Marion loses herself in addiction. As a final descent into degradation she turns tricks and performs in a grotesque lesbian cabaret-sodomy act in front of paying customers. Alas, alas! (Or, if you're an American boy or girl circa 2012, wow that looks cool.)

Most tragic of all the quartet, arguably, is Harry's middle-aged mother Sarah (Ellen Burstyn), obsessed with shedding weight to appear slim and pretty for her pathetically lumpen lower-class hausfrau fantasy of going on a TV game show. Prescribed amphetamines by a faceless, impersonal medical establishment, she drifts into mindless oblivion herself, and it's all perfectly legal.

Skillful, surreal camerawork (that won the director comparisons to Stanley Kubrick) and sympathetic characters - none of them want to be Scarface, they just want to be happy - make REQUIEM FOR A DREAM more than just the proverbial "classroom scare film." Or does it?

I must come clean and say that as a lifelong straight-edge and non-drinker (in other words, a freak and outcast) I had sort of banked on the idea that remaining stone-sober would have paid off for me in the long run. As all my peers theoretically would wind up like the characters in REQUIEM FOR A DREAM, I would stand tall as just about the only employable person for miles in what passes for a job market in Ohio.Yet, that scheme failed miserably. Nobody wants to hire boring old me. Deep down inside I suspect a lot of companies and HR recruiters are instead keenly on the lookout for applicants on the level of Marion: "Chick is crazy! She'll do anything, man! And she looks like that smokin' hot Jennifer Connelly, too!"

Okay, now I understand why CWRU is showing REQUIEM FOR A DREAM. Solid post-grad career and role models. (3 out of 4 stars)
Posted by Charles Cassady Jr. at 12:00 AM