[PASSIONE screens Thursday September 13th at 7:30 pm at The Cedar Lee Theatre as part of the Cleveland Italian Film Festival.] 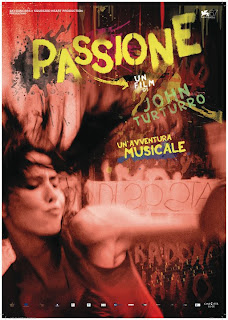 
After a brief introduction in which Turturro appears on camera to give an abbreviated history of Naples, we dive in to the first of the film's many musical numbers. These segments are without a doubt the film's greatest strength. The songs and artists were unknown to me, but there's something inherently familiar about them that evokes an emotional response nonetheless. Turturro's visualizations are simple for the most part, looking more like the primitive Scopitones of the fifties moreso than slick modern music videos.

As for the documentary aspect of the film, it's somewhat less satisfying. We are given a few brief snippets of information, but at the end of the day its a pretty lightweight examination of the subject. These segments don't hurt the film, and we do glean one or two insights from them, but for the most part Turturro simply lets the music do the talking, and that's fine. When it comes to a music documentary, I'd rather a film air on the side of giving us more music than talk. Somewhere in the middle might be better still, but better this than taking the route some music docs do in which you never get to hear an entire song.

So no, PASSIONE is not a full seven course Italian meal. It's more like an antipasto and a nice sandwich and a glass of wine, maybe a cannoli to top it off. Continuing the metaphor, we never get to the more substantial pasta or meat dishes that would have made this a more valuable and informative documentary. On the bright side, however, at least you won't walk out feeling too stuffed, and you just might be hungry to seek out more. 2 1/2 out of 4 stars.
Posted by Bob Ignizio at 12:00 AM