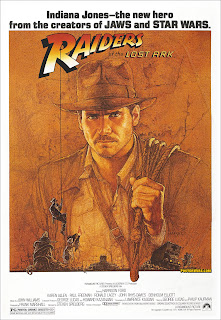 One of the most enjoyable action/adventure films ever made, Steven Spielberg's 'Raiders of the Lost Ark', returns to the big screen for one week. Regal Cinemas at Crocker Park and Middleburg Heights will be showing the film for one week only in honor of the film being released on Blu-ray. You can even catch it in IMAX at Crocker (Middleburg Heights will be showing it on a normal screen) Scratch that, looks like both theaters are only showing it on normal screens. Evidently they need the IMAX theater for the new RESIDENT EVIL flick. Still, Raiders on the big screen is worth seeing. Catch it while you can!