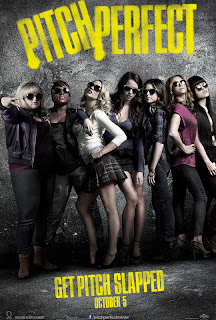 To put it simply, PITCH PERFECT is more or less “Glee” goes to college. The plot centers on the surly Becca (Anna Kendrick), a would-be DJ and music producer who has no interest in higher education. She'd much rather be out in L.A. trying to make it in the music biz, which her professor father reluctantly agrees to let her do if she'll finish one year of school. In the meantime, she has to take classes at Barden University, where a cappella singing groups are treated like star athletes.

The all-male Treblemakers are the kings of the campus, having won several national titles. The all-girl Bellas are the perennial runners-up, but after team leader Aubrey (Anna Camp) blows chunks on stage, most of her team deserts her except best friend Chloe (Brittany Snow). In order to keep the Bellas going and have one final shot at winning the a cappella crown her senior year, Aubrey is forced to assemble a team of musical misfits, including a reluctant Becca and the brash “Fat Amy” (Rebel Wilson). The Treblemakers need a little new blood as well, and wind up drafting Jesse (Skylar Astin), a nice guy with a rough exterior who has a crush on Becca.

The basic plot of follows the same trajectory as every other movie where a rag-tag group of outcasts comes together to prove to themselves and the world that they can be winners. Not exactly original, but it's a tried and true crowd-pleasing formula, and for the most part it works here once again. The biggest problem is that PITCH PERFECT suffers from a bit of a split personality. Part of it wants to be a sincere romance, part of it wants to be a raunchy laff riot, and part of it wants to win the audience over with rousing musical numbers. Director Jason Moore seems capable of handling all three aspects separately, but he never quite gets them to mesh. In trying to juggle all these different agendas, it often feels as if important plot points and character beats get rushed past or left out altogether.

Another issue is that the film shows way too much of the Bella's early performances. In these scenes, the girls are supposed to be competent but boring as Aubrey refuses to stray from the same three songs and middle of the road arrangements. Well, the film certainly succeeds in that respect, and then it keeps driving the point home until we're just as bored as the judges and audiences in the film. The point could have easily been made much more economically.

Despite these issues, PITCH PERFECT is a reasonably entertaining film. The musical performances are fun and energetic, and there are some really big laughs. The romance plot between Becca and Jesse doesn't exactly set the world on fire, but it doesn't drag the film down, either. And every time the movie does threaten to wear out its welcome, there's a musical number or a bit of comic business from cast MVP Rebel Wilson, or close runners-up Elizabeth Banks and John Michael Higgins as a pair of irreverent color commentators, just around the corner. 2 1/2 out of 4 stars.
Posted by Bob Ignizio at 12:01 AM