[NOBODY ELSE BUT YOU screens Thursday September 20th at 8:45 pm and Saturday September 22nd at 7:15 pm at the Cleveland Cinematheque.] 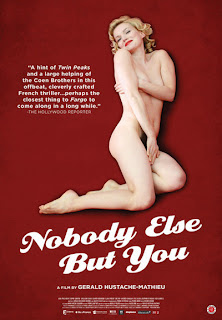 The protagonist of NOBODY ELSE BUT YOU (Poupoupidou) won this writer over the moment he put his car in reverse and pulled over to the side of the road just so he wouldn't lose reception while The Sonics “Shot Down” was playing on the radio. Aside from showing that Rousseau (Jean-Paul Rouve) has good taste in American garage rock bands, the scene also serves to give him his first look at Candice Lecoeur (Sophie Quinton) via her image on a billboard for cheese. The audience has already been introduced to Candice in the opening credits, dancing nude behind sheer fabric, seemingly happy.

As we eventually learn, Candice is (was) a local celebrity spokes-model for a cheese company who parlayed her limited fame into a job as a sexy weather girl. She also believed herself to be the reincarnation of Marilyn Monroe. As Candice tells us in voice-over, she was just about to begin a new diary which she hoped might symbolize a new and better direction for her life. Instead, it marked the end. The now deceased Candice goes on to explain that she hasn't written for three days because that's how long she's been dead.

Rousseau has come to the small town where Candice lived for the reading of his Uncle's will, which yields him a taxidermied dog for his troubles. A hack mystery writer described more than once as something of a James Ellroy wannabe, Rousseau is intrigued when he hears the news of Candice's death. Since the girl's body was found in an area of “no man's land” between France and Switzerland, and since it looks to be a suicide, the local police have closed the case without investigating. Rousseau finds all this a bit odd, and so takes it upon himself to do a little detective work, along the way teaming up with a gay police officer (Guillaume Gouix) who shares his suspicions. Candice's unseen spirit occasionally provides post-mortem commentary on their efforts, and wonders if she might not still be alive if she had just met Rousseau a little sooner.

The film makes use of a lot of familiar elements such as the narration by a dead character (SUNSET BOULEVARD), a protagonist who becomes obsessed with a beautiful dead woman to the point that it borders on necrophila (LAURA), a quirky small town surrounded by forest whose beauty queen turns up dead (TWIN PEAKS), speculation about the death of Marilyn Monroe, and a mystery writer turned detective (too many precedents to mention) just to name to the most obvious ones. NOBODY ELSE BUT YOU then takes these well worn tropes and assembles them into something fairly fresh and original. The film has a voice all its own, and even the character types we've see before are given new spins. Writer/director Gérald Hustache-Mathieu may not quite have crafted a masterpiece here, but he has at least given us a smart and entertaining mystery with interesting characters, clever twists, and a well realized theme about the price beauty and fame, even of a minor kind, can sometimes exact. 3 out of 4 stars.
Posted by Bob Ignizio at 12:01 AM